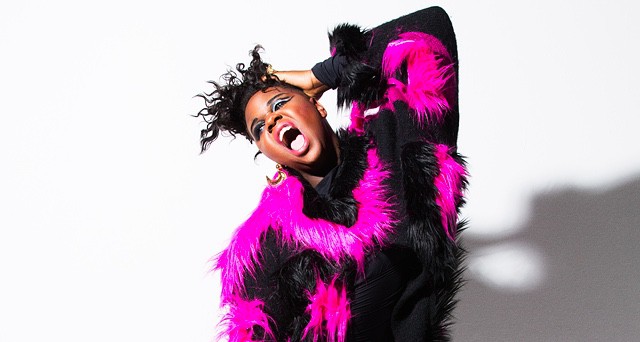 It’s premature to call 23-year-old Alex Newell a gay icon just yet, but the gender-bending actor and singer has been the voice behind a recent string of irresistible dance tracks. Despite missing disco’s peak by nearly two decades, Newell’s powerful, soulful voice recalls the legendary Martha Wash, while his style and attitude reminds us of the true disco diva, Sylvester.

In addition to his music, you probably recognize Newell for his work on Fox’s Glee. Newell first gained attention competing on Oxygen’s reality competition The Glee Project which mined MySpace for actors to join the series at its creative and popular peak. He didn’t win, but his memorable performances (sometimes in full drag) struck a chord with the show’s creators. Newell brought us the first transgender teen on network primetime TV as Unique debuting in the show’s third season. He also appeared in the independent film Geography Club about a secret support group for gay teens.

Newell has also been active in the LGBT community, performing at Pride and charity events for The Trevor Project, the Human Rights Campaign and others. He’s also received special recognition from GLAAD.

If your summer playlist is in desperate need of a disco boost, put on your dancing shoes and check out some of our favorite Alex Newell performances below.

Newell’s portrayal of Unique on Glee was a milestone for trans teen representation, but it wasn’t met without any ire. Commentator/neanderthal Bill O’Reilly expressed concern that the character would encourage children to be confused about their gender.

Newell said, “When people don’t understand something their first reaction is to hate it,” he said to The Advocate. “But [the LGBT community] isn’t going away. We’re a part of everyday life and people need to be educated.”

The above clip showcases Unique’s struggles with the bathrooms at school, an issue that’s become more prominent in recent headlines. The character would go on to deal with crushes and even performed a knockout number with a trans choir in later seasons. “Playing Unique hasn’t changed how I feel about myself,”

Newell told Out Magazine. “But it has changed how I hold myself. Unique is so confident that I found myself [saying], ‘You need to be the role model that your character intends you to be.’”

Newell’s been spotted singing at Pride events around the country, but one of his most memorable moments came at New York City’s AIDS Walk in 2013 where the young singer wowed the crowd (including Martha Wash) with his performance of “I Know Where I’ve Been” from Hairspray.

When Newell lends vocals to a dance track, it immediately pumps up the power. Our favorite guest spot was on The Knocks’ tune “Collect My Love.” You can see director Austin Peters’ ode to the NY club scene in the video above. Additionally, Newell added must-hear vocals to Clean Bandit’s “Stronger” and Blonde’s “All Cried Out.”

Recently, Newell went full disco for HBO’s 1970s period drama Vinyl. The resulting “Kill the Lights,” with DJ Cassidy and Nile Rodgers, is a strong contender for Song of the Summer.

Newell’s own work is just as polished. On his debut EP, Power, released earlier this year, his voice soars over six dance-pop tracks. The debut single, “This Ain’t Over” was pure dance perfection, but we’re partial to “Basically Over You.” The video features Newell seeking revenge on an ex portrayed by America’s Next Top Model and Dancing With the Stars “sexually fluid” hunk Nyle DiMarco.