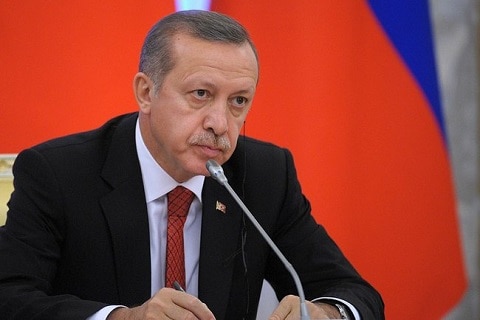 Turkish President Recep Tayyip Erdogan has said that Western countries are more interested in gay and animal rights than the fate of Syrian refugees. Around 2.7 million Syrians are currently being housed in camps inside Turkey.

Speaking at an event last Friday, Erdogan said the West possesses a mindset “remnant of slavery and colonialism”.

According to Anadolu Agency, Erdogan added:

“Shame on those who in the West divert their sensitivity to the so-called freedoms, rights, and law shown in the debate over gay marriage away from Syrian women, children, and innocents in need of aid.

“Shame on those who divert their sensitivities to the living space of the whales in the seas, seals, [and] turtles away from the right to life of 23 million Syrians. Shame on those who put their security, welfare [and] comforts ahead of other people’s struggle to survive.”

Referring to Denmark’s plan earlier this year to confiscate valuables from incoming refugees to cover the costs of caring for them, he added: “Shame on the slavery-and-colonial-era mindsets that set their eyes firstly on incoming refugees’ money in their wallets, and jewelry on their arms and necklaces.”

Erdogan’s latest attack on the West comes during a standoff with the European Union over demands that Turkey amend its anti-terrorism law in order to secure visa-free travel in Europe. The conflict in Syria has now driven a sixth of the country’s population to seek sanctuary in neighboring countries, making it the largest refugee crisis in a quarter-century, according to the United Nations.