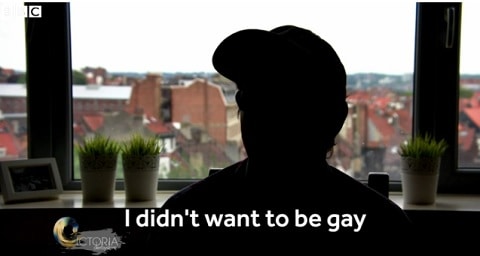 A gay man in Belgium – where euthanasia has been legal since 2002 – is hoping to end his life because he cannot accept his sexuality.

The majority of confirmed euthanasia cases in Belgium in 2013 – the latest year for which records are available – are elderly people suffering from terminal illnesses. Only 4% were suffering from psychiatric disorders. For psychiatric illnesses three doctors must agree a patient can be euthanized. It is also required that patients must be legally competent and conscious, are making a voluntary request and are suffering from an incurable condition.

Identified by the pseudonym Sébastien by the BBC, the 39-year-old says he has gone through 17 years of therapy and medication and has no other option.

[Sébastien] claims to be attracted to young men and adolescent boys and is scarred from a difficult childhood; his mother was ill and there was a strict Catholic ethos.

“My whole life has led me to this, really,” he says. “My mother had dementia, so I wasn’t right, mentally.

“All that was instilled in me, so I was extremely lonely, extremely withdrawn, very inhibited physically – scared to go out, scared of being seen, all the time scared, hugely shy.

“And growing up, I met a boy and I fell crazy in love. We were both 15. And it was just unbearable for me, you know? I didn’t want to be gay.”

“I have always thought about death. Looking back on my earliest memories, it’s always been in my thoughts. It’s a permanent suffering, like being a prisoner in my own body.”

He says he has been plagued by, “A constant sense of shame, feeling tired, being attracted to people you shouldn’t be attracted to – as though everything were the opposite of what I would have wanted.”

However, Gilles Genicot, lecturer in medical law at the University of Liege and a member of the euthanasia review committee, says that Sébastien’s case does not fulfill the criteria for euthanasia:

“It’s more likely he has psychological problems relating to his sexuality. I cannot find a trace of actual psychic illness here.

“But what you cannot do is purely rule out the option of euthanasia for such patients.

“They can fall within the scope of the law once every reasonable treatment has been tried unsuccessfully and three doctors come to the conclusion that no other option remains.”

There is widespread support for euthanasia in Belgium. In 2014, the law was changed to allow euthanasia for terminally ill children.

Watch the interview via the BBC. You can also watch a Victoria Derbyshire report on gay conversion therapy from last year below.