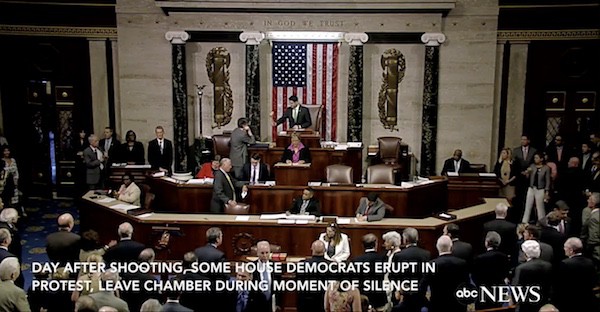 House Speaker Paul Ryan led a moment of silence on Monday night for victims of the Orlando massacre and then swiftly moved on to other business, causing Democrats to erupt in anger over Republican inaction on guns after the latest mass shooting, the worst in American history, which took the lives of 49 people.

Day after shooting, House Democrats erupt in protest; some walk out during moment of silence https://t.co/l5g73n1fS6https://t.co/PrsT9B8V9y

Some lawmakers walked out of the House chamber before the moment of silence began in protest, including Rep. Jim Himes (D-Conn.). Earlier in the day, Himes declared he would not participate in any more moments of silence as a form of protest of the lack of legislative responses to mass shootings.

“The fact is that a moment of silence is an act of respect, and we supported that. But it is a not a license to do nothing,” House Minority Leader Nancy Pelosi (D-Calif.) told reporters off the House floor afterward.

“Members have just had enough of having one minute, a moment of silence on the floor, and then take no action,” she said.

Clyburn told reporters that he wanted to speak about the upcoming anniversary — this Friday — of the shooting at a historically black church in his district a year ago in Charleston, S.C.

“I think that we have some appalling silence taking place in this body when we ought to be responding,” Clyburn said.

Democratic leaders said they want votes on three specific bills: legislation to close the so-called “Charleston loophole,” which allowed the shooter in that case to buy a gun after three days even though a background check wasn’t completed; prevent people who are on the FBI’s no-fly list from buying guns; and prohibit anyone convicted of a hate crime from purchasing firearms.

Previous Post: « ‘For a lot of our families, having a son or a daughter who is gay maybe was a secret until this weekend’
Next Post: Democrats Revive Calls For End To Gay Blood Ban Following Orlando Massacre: VIDEO »