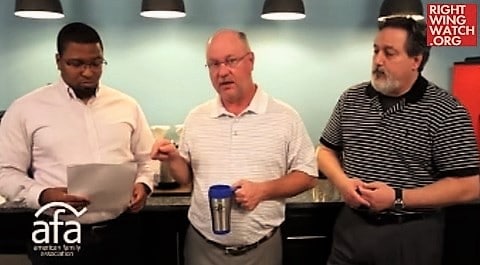 Members of hate group the American Family Association (AFA) are saying that gay people should stop having gay sex to stop the spread of HIV/AIDS so that way funding doesn’t have to go to HIV/AIDS research.

“You know, one of the real ironies of this proclamation is the president here cites the need for more funding for HIV/AIDS. But, unlike Michelle Obama, who advocates that children stay off the sodas, he doesn’t advocate behavior change when it comes to homosexual behavior affecting your health. Abe, why doesn’t he say, ‘Stop doing what you’re doing and you won’t get AIDS’?”

In the video, Hamilton responds:

“I think once again you highlight one of the glaring episodes of hypocrisy that comes from secular progressivism as applied to public policy. In terms of other health areas, well, you need to get exercise, you need to cut the sugars, you need to not eat sodas, but in terms of homosexuality, there’s no adjustment needed in your behavior, we just need to pour more money into treating the results of the behavior. Even though it’s very provable that engaging in homosexual activity is dangerous to your health, in the same way that smoking is, or sugar, too much sugar, or anything of that nature.”

Simply because two men engage in sexual deviancy doesn't mean they should be a protected class or have special privileges!

Not to be outdone, Vitagliano took umbrage at Obama urging Congress to pass the Employment Non-Discrimination Act because “the only [people] I know that are getting fired in this country in 2016 are Christians because they oppose that proclamation and the ideas behind it.”