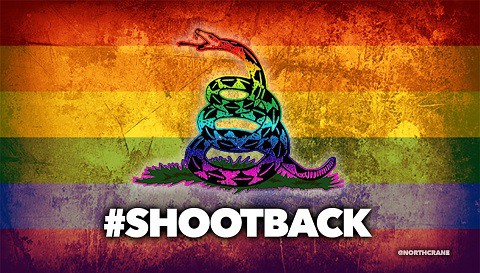 In the aftermath of the Orlando massacre last weekend, the West Hollywood area has been plastered with controversial stickers and posters featuring a rainbow-colored version of the Gadsen flag and the hashtag #ShootBack. 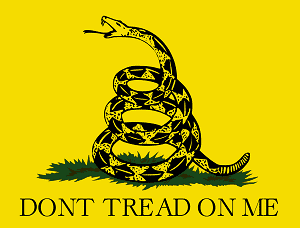 The Gadsen flag (right), often used by the Tea Party movement, features a coiled, striking rattlesnake with the words “Don’t Tread On Me.”

The signage appeared near West Hollywood City Hall, the Pacific Design Center and along Santa Monica Boulevard on Thursday morning. A number of stickers and signs were to be seen near the Abbey Food & Bar, a well-known gay lounge.

The signs were posted just days after Sunday’s shooting at the Pulse nightclub in Orlando, Fla. The 29-year-old gunman, Omar Mateen, had spoken in the past of his hatred for gay people before killing 49 club-goers and wounding 53 more.

Capt. Holly Perez of the Los Angeles County Sheriff’s Department West Hollywood Station said she first noticed one of the rainbow #ShootBack signs Wednesday night as she was running along Santa Monica Boulevard. She was surprised, initially thinking it was just something leftover from Sunday’s L.A. Pride parade and “a fluke.”

But then she kept seeing them — in the public right of way and on private property — and alerted others in the Sheriff’s Department.

“I understand the sentiment behind them and 1st Amendment rights, but it’s a bad message,” Perez said. “I hope it’s just people venting that they could do this, and I’m hoping their calmness will take over. It’s our job to keep you safe.”

West Hollywood Mayor Lauren Meister said “We are disturbed by [the signs]. We don’t believe in an eye for an eye, and we advocate against gun violence.”

West Hollywood Councilman John Duran added that “Even during our heightened days of civil disobedience and protest, we have only advocated peaceful means, never arming ourselves and retaliating with violence.”

David Cooley, owner and founder of the Abbey Food & Bar, said said that “the best way to shoot back is to enact serious change to our gun policy. We need an outright ban,” he added, “on all assault weapons and better protections to keep all guns away from bad people.”