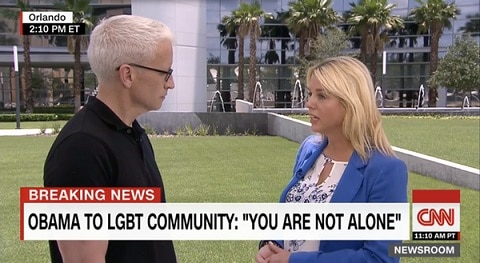 Last month, Cooper took Bondi to task for her about-face on LGBT rights in the wake of the Orlando shooting. Although Bondi has been vocal in her fight against same-sex marriage in the state, she has signaled her support for the LGBT community, stating that “anyone who attacks our LGBT community, anyone who attacks anyone in our state, will be gone after to the fullest extent of the law.”

“I talked to a lot of gay and lesbian people here yesterday who are not fans of yours and who said that they thought you were being a hypocrite, that you for years have fought – you basically gone after gay people, said that in court that gay people simply by fighting for marriage equality were trying to do harm to the people of Florida. To induce public harm, I believe was the term you used in court. Do you really think you’re a champion of the gay community?”

Bondi argued that she was merely defending the state constitution, adding that she “never said I don’t like gay people, that’s ridiculous.”

At a June 30th OneOrlando Fund event, in conversation with Cohen, Cooper said:

“We ended up shaking hands and she said she thought I didn’t think I liked her and I said, ‘I have no personal feelings about you whatsoever.’ It’s not my job to go out to dinner and go out and be friends with people I’m covering.

“I tried to be as respectful as possible and let her talk about what she wanted to talk about and when the list of things she actually could talk about were limited.

“Clearly she wasn’t happy with how it all ended up but that’s okay.”

The OneOrlando Fund aims to provide support to the victims of the Pulse tragedy and their families. Cohen and Cooper raised $240,000 for the Fund.

Watch the Cooper/Bondi grilling below followed by the Cooper/Cohen interview.