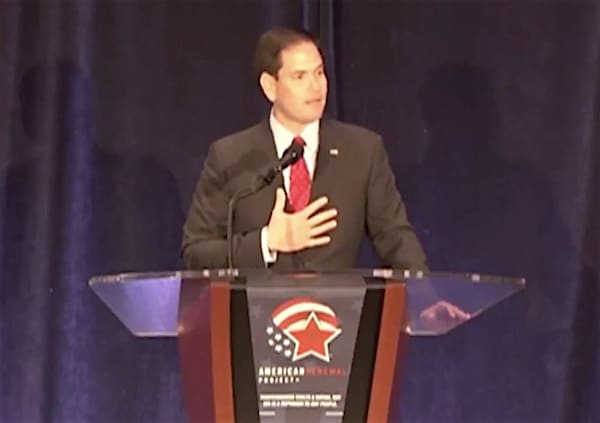 Marco Rubio spoke Friday at an event hosted by the Florida Renewal Project in Orlando, a gathering of anti-LGBT pastors, on the two-month anniversary of the massacre at Pulse Nightclub.

Rubio urged tolerance toward LGBT people despite spewing rhetoric during the presidential primary that says the opposite.

“In order to love people you have to listen to them,” Rubio, who is losing his lead in a primary challenge set for August 30. “We have to abandon the spirit of judgment.”

“When it comes to our brothers and our sisters, our fellow Americans, our neighbors in the LGBT community, we should recognize, that our nation, while the greatest nation in the history of mankind, is one whose history has been marred by discrimination against and rejection of gays and lesbians.”

“To love our neighbors in the LGBT we should recognize that even as we stand firm in the belief that marriage is the union between one man and one woman, there are those in that community, in same-sex relationships, whose love for one another is real and who feel angry and humiliated that the law id not recognize their relationship as a marriage. To love our neighbors we must recognize that many have experienced sometimes severe condemnation and judgment from some Christians. They have heard some say that the reason God will bring condemnation on America is because of them — as if somehow God was willing to put up with adultery and gluttony and greed and pride, but now this is the last straw.”

Rubio expressed a fierce opposition to same-sex marriage in the presidential primaries.

Rubio promised that as president he would reverse Obama’s LGBT executive orders that stop religious business owners from discriminating against gays, appoint conservative SCOTUS justices who don’t believe that gays have the right to marry (or that women have rights over their own bodies). He also said any transgender rights laws regarding bathroom usage have got to go.

But love thy neighbor.