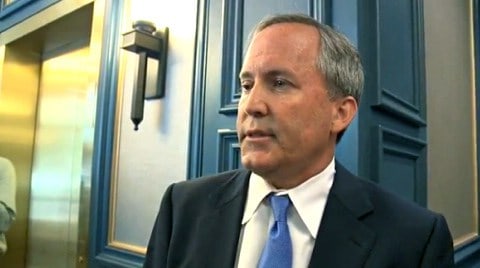 The State Bar of Texas has dismissed an ethics complaint against Republican Attorney General Ken Paxton over his advisory opinion encouraging government employees to defy the U.S. Supreme Court’s ruling in favor of same-sex marriage.

More than 200 attorneys filed the complaint alleging that Paxton violated his oath of office by counseling clients to engage in criminal or fraudulent activity, when he said county clerks and others could ignore Obergefell if it conflicted with their sincerely held religious beliefs. But the State Bar somehow determined that Paxton’s opinion didn’t rise to the level of “professional misconduct.”

In a statement to the Tribune, Paxton spokesman Marc Rylander lauded the decision, saying, “We are happy — but not surprised — that this meritless complaint was finally dismissed.”

Steve Fischer, a former director of the State Bar of Texas and one of the attorneys who filed the complaint, said that while he didn’t get the result he wanted, there is “no further interest to continue the grievance.”

“We sort of made our point that he can’t tell clerks to disobey a Supreme Court’s ruling,” he said. “It’s the law of the land. He’s entitled to his own personal opinion, but he should draw a line.”

But the ethics complaint over his same-sex marriage opinion was ultimately the least of Paxton’s worries. He’s also facing first-degree felony charges, as well as a civil lawsuit from the SEC, for alleged securities fraud.

Previous Post: « The Internet is Trying to Make ‘Gay Uncles Day’ Happen on August 14
Next Post: Rio 2016 Day 4 Report: Boys from Ipanema, a Stunner and an ‘Ouch!’ Moment »