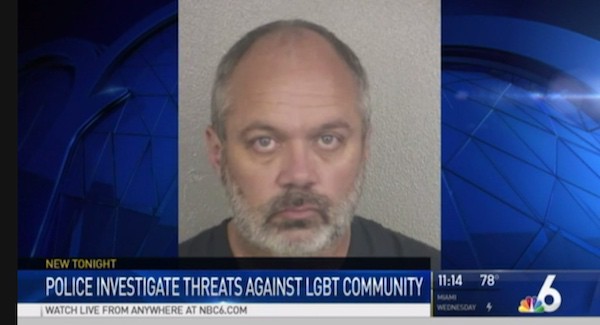 Jungwirth, 50, of Orlando is charged with the interstate transmission of a threatening communication.

Jungwirth had left this message on the page of a Facebook user in late August, threatening the attack:

More details of an affadavit released by the FBI were reported by 7News Miami:

Earlier this year we reported on Craig Jungwirth – a man who took over the Beach Bear Weekend event in Florida and used it to solicit and scam money from unsuspecting members of the LGBTQ community. What began as a story of hisharassment of the Sisters of Perpetual Indulgenceexploded after information surfaced that not only were the events listed for his Beach Bear Weekend event fake but also all hotel bookings through the event website didn’t actually reserve local hotels (as they’d never spoken to Jungwirth or any event organizers).

Jungwirth faces up to five years in prison, three years of supervised release and a $250,000 fine if convicted.