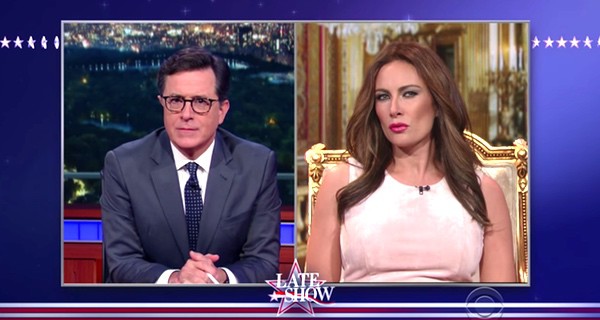 Laura Benanti’s Melania Trump made a triumphant return to The Late Show last night to respond to the controversy over the “pussygate” tapes.

Melania has not been in hiding, she’s never being coached what to say, she is never blinking out in morse code that someone else is in the room telling her what to say, and she thinks she has forgiven her husband.

Asked to respond to the tapes, Melania replied:

“The left wing media, international bankers, and Billy Bush…I said to my husband that those words are very unappropriate. Plus, he said them on a bus. Disgusting….He explained it was locker room talk. I id not know this but when American men gather to sport they always brag of grabbing women by the Billy Bush.”

When asked about Trump’s remarks that the women were too ugly for him to have assaulted, Melania replied:

And finally, Melania let one get away from her:

“Boys, men, it’s the same. No matter how nice they seem secretly they’re all foul-mouthed Billy Bush grabbing pigs. I’m talking about your husband, your brother, the Pope, Luke Skywalker. All of them. They’re all animals. If only a woman could be president!”