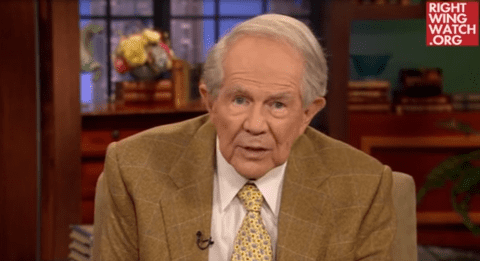 Last week, Comey announced that the FBI would be examining new email evidence pertaining to Hillary Clinton’s use of a private email server during her tenure as Secretary of State.

Doing away with any notion that Comey’s actions were a partisan move designed to derail Clinton’s campaign, Robertson – a Trump fan, obviously – said that “god did something amazing” by ignoring the Christian notion of free will.

Quoting the bible, Robertson said  “The integrity of the upright guides them, but the unfaithful are destroyed by their duplicity.”

Watch below via Right Wing Watch.

Previous Post: « ‘Prince Charming’ Picks, A Queen Rises On ‘The Crown’ And More TV This Week
Next Post: Troubling New Reports Tie Trump to Russia, But FBI Claims to See Nothing »