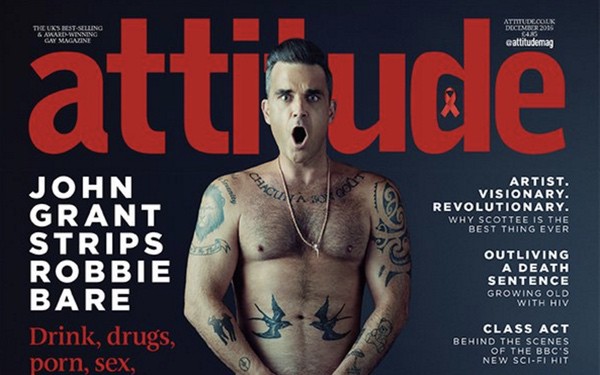 Robbie Williams says he’d love if he was gay because he’s like to have sex “on tap” all of the time, in a new interview with the UK’s Attitude magazine.

He says that his lack of homophobia once caused him to question his own sexual orientation:

“When it stopped being: Robbie Williams gay, I wondered what had happened. I was raised in a society where gay was the thing you levelled at somebody you wanted to hurt the most. So then being exposed to this world that I loved being a part of… I took my first ecstasy at a gay club… had the most incredible time. I thought: ‘Why have I lived like that when I could live like this forever?’ And I tried doing that, which led me to AA. But also because of the homophobia that there is out there, I was sort of left as a 21 year old going: ‘Actually, I don’t hate the gay… so does that mean that I’m gay, too? So I was 21 or 22 and I was like: ‘Oh, that must mean that I’m somewhat gay, in some sort of way.'”