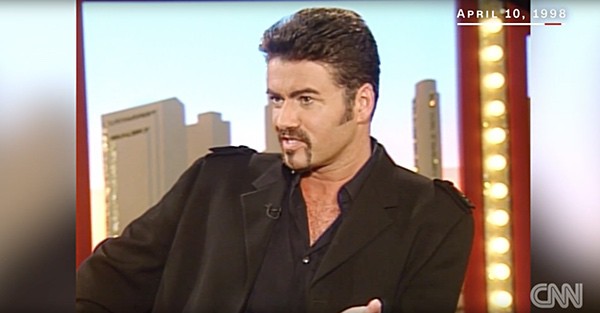 The 1998 CNN interview in which George Michael came out of the closet following his Beverly Hills ‘lewd conduct’ arrest has been posted online. He was never ashamed.

Michael offered up reasons for his sexual ambiguity up until that time:

“It works very successfully in pop culture because it means, especially if you’re trying to communicate something emotional, or sexual, that you’re communicating with both men and women…My sexuality was not cut and dried.”

“I spent the first half of my career being accused of being gay when I hadn’t had anything like a gay relationship…So I spent my years growing up being told what my sexuality was … which was kind of confusing.

Michael said that what prompted him to come out is because he’d done that “in a way that I hadn’t intended to.”

“I think having done something as stupid as that…I’m a very proud man. I want people to know that I have not been exposed as a gay man in any way that…I don’t feel any shame. I feel stupid and I feel reckless and weak for having allowed my sexuality to be exposed this way. But I don’t feel any shame whatsoever and neither do I think I should.”

Yes, it’s true that the manner in which he was outed became a standard playground homophobic trope, a means for bigots to express their revulsion at how sordid and morally corrupt they deemed gay men to be. But haters gonna hate, as the expression goes – homophobes will latch on to anything to confirm their bigoted narrative. For LGBT people consumed with terror at the realisation of who they were, to see the man who sang Last Christmas telling his tormentors where to stick it was liberating….

…We live in an age where bigots are newly emboldened. They treat supporters of anti-racism, feminism and LGBT rights like this: “You’ve had your party, now it’s over, and it’s our turn.” It is tempting to turn and retreat. But, as a closeted teenager back in 1998, it is impossible not to recall the courage and defiance of George Michael. A talented and much adored musician, yes. But also a gay man, and a gay icon, who made the lives of so many LGBT people that little bit easier.