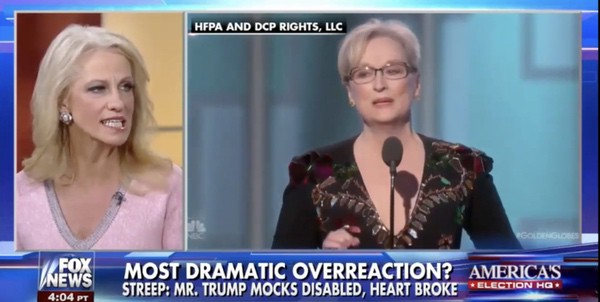 Trump flunky Kellyanne Conway hit FOX & Friends and CNN’s New Day to strike back at Meryl Streep for her truth-telling on the Golden Globes and tried to deflect Donald Trump’s bullying and unpresidential behavior by bringing up the four people in Chicago who were arrested last week for torturing a special needs teen and streaming it on Facebook Live.

On FOX & Friends, Conway claimed that Streep, not Trump, is the one “inciting people’s worst instincts” for daring to criticize him.

Said Streep at the Globes:

There was one performance this year that stunned me. It sank its hooks in my heart. Not because it was good. There was nothing good about it. But it was effective and it did its job. It made its intended audience laugh and show their teeth. It was that moment when the person asking to sit in the most respected seat in our country imitated a disabled reporter, someone he outranked in privilege, power, and the capacity to fight back. It kind of broke my heart when I saw it. I still can’t get it out of my head because it wasn’t in a movie. It was real life.

And this instinct to humiliate, when it’s modeled by someone in the public platform, by someone powerful, it filters down into everybody’s life, because it kind of gives permission for other people to do the same thing. Disrespect invites disrespect. Violence incites violence. When the powerful use their position to bully others, we all lose.

Said Conway to FOX & Friends: “I’d like to hear from her today if she wants to come and continue her platform on behalf of the disabled.”

Added Conway: “She sounds like 2014. The election is over. She lost…Everybody in that audience, with very few exceptions, was of a single, myopic mind as to how they wanted the election to go and how they expected the election to go. They lost and I really wish she would have stood up last night and said ‘look, I didn’t like the election results, but he’s our president and we’re going to support him.’ But this is Hollywood.”

Previous Post: « Hillary Clinton Gets Several Standing Ovations from Audience at Final Performance of ‘The Color Purple’ – WATCH
Next Post: Actor, Writer, and Facebook Talk Show Host Jeffery Self Got Engaged with the Help of a Trader Joe’s Orange »