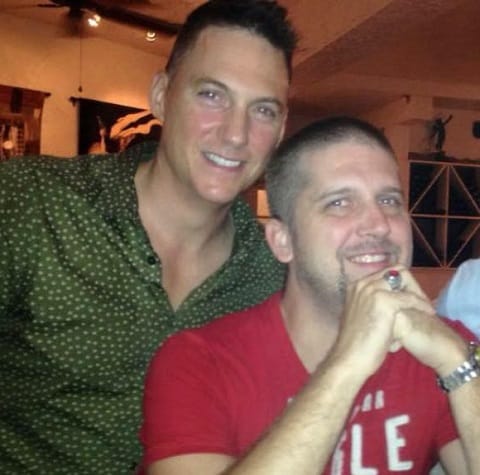 A man accused of a homophobic hate crime in Key West was arrested yesterday in North Carolina.

The suspect is accused of assaulting a gay couple last week. Brandon Ray Davis shouted gay slurs at Kevin Seymour and Kevin Price (above) and said “You live in Trump country now.”

According to the Miami Herald, the Key West Police Department said 30-year-old Davis was taken into custody by the Onslow County Sheriff’s Office in North Carolina on an “extraditable warrant” for felony aggravated battery stemming from the February 23 incident.

[Davis] is accused of using a deadly weapon — his scooter — to nearly run down two men on bicycles while deluging them with homophobic comments. Since it’s classified as a hate crime, if Davis is convicted, he could face enhanced penalties.

[The victims] told police that about 1 a.m. on Feb. 23, they were riding bicycles in the 700 block of Duval when they saw a man swerving on a rented scooter. Seymour says he shouted to warn the scooter rider, identified by police as Davis, that he almost hit a car. Davis yelled, “You guys are a couple of fags,” “I bet you faggots voted for that bitch Hillary” and “You live in Trump country now,” police say.

When Seymour threatened to call police, Davis allegedly told him, “If you do that, I’ll cut you up.”

At one point, the scooter rider struck the rear tire of Seymour’s bike, knocking him to the ground. Seymour and Price got the scooter tag number before he fled. The scooter was rented from A and M Rentals. It was found parked near the Southernmost Point.

Police identified Davis in part via the scooter rental agency, where Davis left a copy of his driver’s license.

According to the arrest warrant, police say, “Probable cause exists to believe there was evidence of prejudice in Davis’ attack of Seymour…” as Davis “used explicit bias language in reference to their sexual orientation. Davis then attacked Seymour without any provocation.”