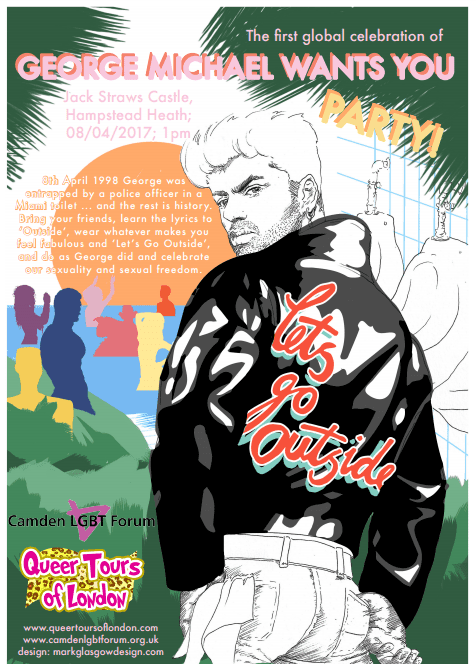 A “Sexual Freedom Party” in honor of George Michael is being planned for April 8 on Hampstead Heath, the London park and well-known gay cruising area where Michael used to pick up men.

The party was announced by the Camden LGBT Forum and Queer Tours of London.

In the week that George Michael was finally laid to rest Camden LGBT Forum in partnership with Queer Tours of London announce they are working together to organise this event as part of a programme of activity that also marks the 50th anniversary of the partial decriminalisation of homosexuality in 1967. While the passing of this law was a momentous moment in our history we know far too well that it wasn’t the end of the struggle.

This fact is highlighted very clearly by the fact that such a confident and successful individual as George Michael still found it impossible to be open about his sexuality in the late 1990’s.  His sexuality was used to both criminalise and humiliate him; sadly despite his and many others who have bravely fought back this still goes on for so many of us.  So we want to use this celebration of one of the LGBTQIA+ community’s finest to continue to challenge the barriers that still remain.

Said Queer Tours of London organizer Nell Andrew: “No longer with us but with presence stronger than ever, we gather at the world famous cruising  area on Hampstead Heath, to ‘Go Outside’ in honour of George Michael.  It will be a celebration of how he too back control after a very nasty public outing and turned it into a celebration of sexuality and sexual freedoms with the song Outside and his every statement and action following this episode said screw the judgement of others. We dance and sing and roll together and shout out, in the immortal words of George, “This Is My Culture!”

Previous Post: « ‘Strike A Pose,’ ‘The Get Down’, ‘Real Housewives of New York City, and More TV This Week
Next Post: Alex Jones Explodes in Expletive-Laden Homophobic Tirade at Rep. Adam Schiff: WATCH »