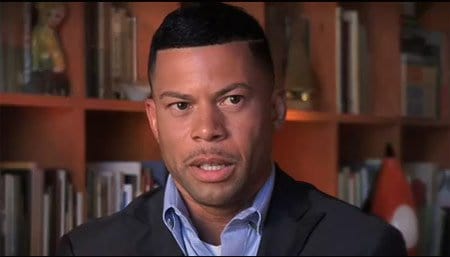 Al Reynolds, who declared himself “not gay” (see video below) back in 2008 when he was much more in the public eye and the husband of TV personality Star Jones, has come out as bisexual.

Reynolds comes out in an interview with Radar in which he also reveals he’s been dating an Illinois assistant state’s attorney since last year.

Says Reynolds in the interview:

I have come to a point in my life where I am ready to discuss my truth. I wasn’t ready to do this then — I wasn’t even ready to think about it, let alone process it. To understand my journey and how I got to this point, you need to understand a little about me.

I am the youngest of six children in a Southern Baptist family. We grew up in a three-bedroom mobile home in Horsepasture, Virginia. We were deeply religious; when we weren’t in church we were in school or an after-school activity. My life was filled with vacation bible school, missionary meetings, Sunday school, choir practice and youth ministry.

Life was not nuanced or frivolous, nor did it allow any time for introspection. It was clear and proscribed, black and white, angels or sinners. And people who were intimate with others of their own gender were the worst of all with no chance of redemption, or the glorious afterlife that I was taught awaited us all.

As a black man, that message and the hate and homophobia were multiplied to the nth degree. I saw no path out that would resolve my personal feelings with my deeply held and ingrained religious beliefs.

Here is Reynolds’ interview from 2008 in which he denies being gay: