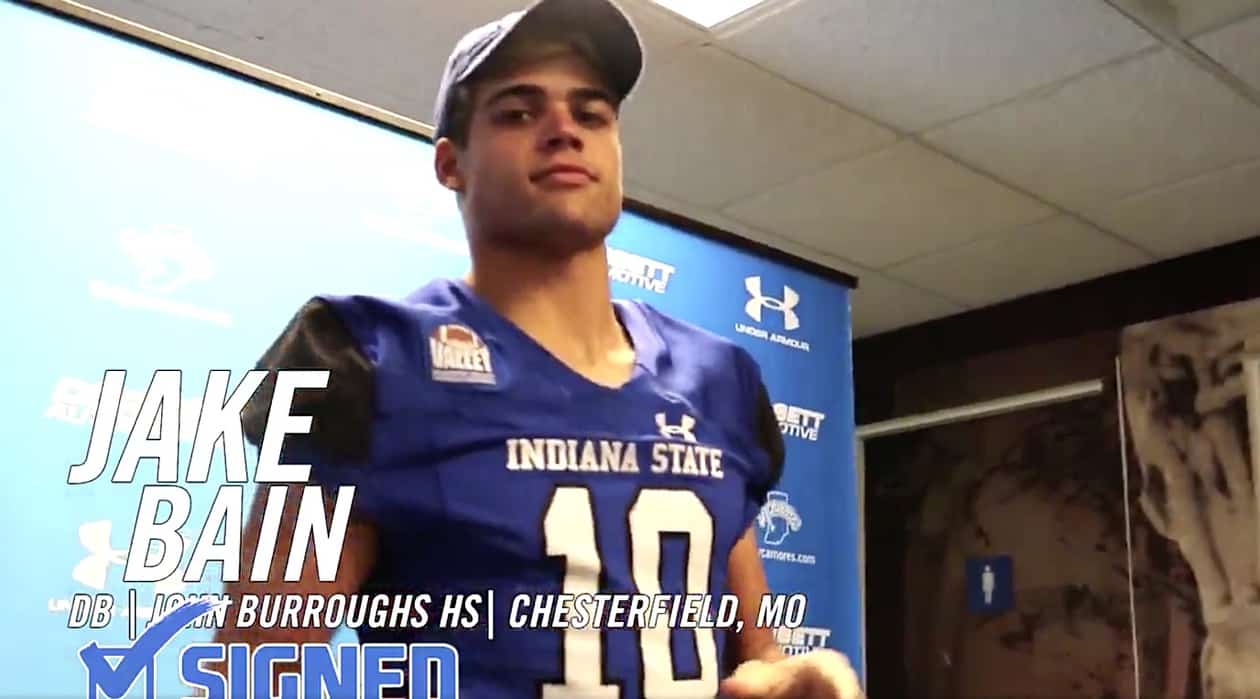 Back in December we reported on the story of Jake Bain, the star athlete and best football player at John Burroughs High School in Missouri. After coming out  as gay at an all-school assembly, he’s now signing with Indiana State.

READ THIS NEXT: HS Football Star Who Came Out as Gay at School Assembly Signs with Indiana State: WATCH

Bain told KSDK that it was difficult hearing things from other players on the field after people knew he was gay: “At the bottom of a pile a lot of times I would hear ‘stay down, you fag.’ I would hear, ‘this is no sport for gay people.’”

The Westboro Baptist Church got wind of Bain’s story as well, and planned a protest at his high school which is scheduled for Monday.

But students have planned a counterprotest that will far outnumber the WBC church members.

“From the beginning, I wanted to just be myself,” Bain said. “And I wanted to show people around St. Louis and everywhere else that you can be whoever you want to be.”

Local support groups, including Pride St. Louis, have denounced the group’s planned protest, scheduled to happen outside of the school.

“We need to speak out where there is hate; when there is prejudice,” said Landon Brownfield, Secretary of the Board for the organization. “It is incumbent upon us to speak out and to challenge it. I think if we don’t then we are complacent.”

Bain admitted he was bothered at first by the upcoming protest, but he’s confident his supporters are bound to outnumber those looking to spread hate.

“I was able to realize that if this international hate group is coming after me and my community, then we must be doing something right,” Bain said.

FOX2 Now’s broadcast on the protest:

The letter sent to parents ahead of the protest is quite extraordinary:

Since news broke that we will be visited by a hate group on Monday, March 12, we have received notes, e-mails, counsel and support from faculty, staff, parents, grandparents, alumni, clergy, neighbors, other schools, other businesses – from people throughout St. Louis, around the state, and around the country who have voiced their support for our LGBTQ+ community – and for ALL of our kids. It has been truly inspiring.

But most inspiring, I have to tell you, has been the response of our students. On Monday morning, I shared the news in assembly and there was a wide range of emotions: fear, sadness, anger. On Tuesday morning, however, more than 200 students showed up an hour before school to discuss the situation and talk about what our response should be. At assembly on Tuesday, one of our students spoke passionately and received a spontaneous and sustained standing ovation. He shared Dr. Martin Luther King Jr.’s words, “Darkness cannot drive out darkness; only light can do that. Hate cannot drive out hate; only love can do that,” and encouraged us to “shine our brightest lights next Monday.” On Wednesday, Diversity ETC student leaders spent their free afternoon processing the input they received and developing what Daniel Harris, our director of diversity, and I believe is a wonderfully thoughtful plan.

Many of you have been asking for updates, and here are the details as we currently know them:

The Picket
From 7:45 to 8:15 am on Monday, March 12, members of the Westboro Baptist Church plan to picket Burroughs on the public sidewalk immediately west of our Clayton Road entrance.

Though we have no reason to anticipate violence of any kind, the Ladue Police Department will be present and visible to control the situation and facilitate traffic.

Our Top Priorities
The WBC wants us to engage with them. Our primary response will be to ignore them.

The most important thing we can do for our kids is make sure they feel safe, secure and supported. To that end, we want every student to find their own path. Monday will be a late day (with assembly beginning at 8:45 am). This will allow students who want to totally avoid the picket to come to school after the WBC has left. It will give students who want to assemble before school, the time to do so.

In addition to 17 members of the Ladue Police Department on and around campus, I am calling on the faculty and staff to be present in full force to provide emotional and logistical support for our students.

To avoid contact with the WBC, here are our suggestions for drop-off and parking:
If you drive your student/s to school, please drop them off at the main entrance or Schnuck Wing, both off Price Road.
Student drivers can park in the Price Road lots or in my front yard (accessed through the north entrance).
We will encourage faculty and staff to park in the Clayton Road lot.

The Student Plan
We expect a large number of students will participate in a 40-minute display of support for our LGBTQ+ community. They will gather at 7:30 am in Haertter Hall for readings, speeches and video clips from alum allies. Then they will make a unity walk from Haertter Hall to the football and field hockey fields and then to the Memorial Gym for a music-filled celebration.

Any students who feel the need to join the counter-protestors at the Clayton entrance will be accompanied and carefully supervised by senior administrators.

Throughout the day, there will be processing spaces available for kids to speak with one another and meet with counselors or other faculty.

How You Can Support Our Students
To be frank, our students want to own this day.

They have crafted a response to the WBC which avoids engaging with the WBC. Instead, their focus is on taking care of one another and celebrating the inclusive community they are building for all students at Burroughs.

Rather than additional adult presence, what they would most appreciate are notes, video clips, and any and all expressions of support, which can be sent to them via Daniel Harris.

Moreover, we have serious concerns about parking on that morning.

A Final Word
In our society, there is always room for respectful differences of opinion. But WBC is nothing more than a hate group. It maintains that God is punishing America because of its tolerance of the LGBTQ+ community. Their vitriolic speech extends to Catholics, Orthodox Christians, Muslims, Jews and U.S. soldiers. Their picketing forays average between six and 30 people (including their own children), and their modus operandi is to carry inflammatory signs to incite reactions from those they picket. It is crucial to note that WBC is not affiliated with any national Baptist organization. Our families, who come from many religious backgrounds, have been vocal and passionate about supporting our students and denouncing the WBC.

On March 12, WBC will be on a sidewalk outside of our campus for 30 minutes … and then they will be gone.

What we will remember is that our students responded with unity and care and courage.