After one of the weaker episodes of the season last week, this week’s RuPaul’s Drag Race delivers a knockout.

A spectacular runway was preceded by a hilarious mini-challenge and a Rusical fit for a Kween. The episode featured some great moments with the queens bonding and an excellent lip sync that ended the episode on a high note. What more could you want? Loved it all.

Let’s turn back *Cher voice* taouuiimmmmme, recap everything that went down and see who was “Strong Enough” to make it to next week. 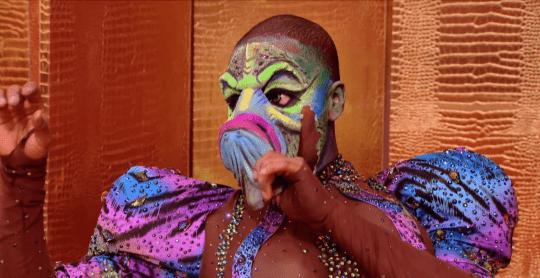 Just when i thought I couldn’t love Asia’s fish mask more, we get the joy of seeing her take it half off. Watching her defend her decision to suggest Vixen deserves to go home while holding her fish lips AND waving her finger around the Vixen’s face was the sort of triple-threat I didn’t know I needed! Then she removed the mask to reveal the black makeup mustache, and I nearly lost it. Oh, Asia, never change.

Vixen is still upset about being throw under the bus, and, yes, she’s still mad at Eureka.

As the gals ditch their mermaid lurks, Monet pines for her first big win, and Aquaria is feeling the pressure now that her Snatch Game victory has placed her in front of the pack.

Our week kicks off with RuPaul’s Drag Race All Stars season one winner Chad Michaels appearing via video in full Cher regalia. Get that hair flip ready, ladies. 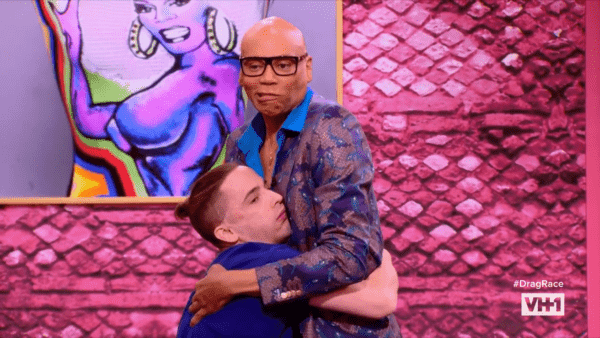 Even this week’s mini-challenge has a Cher flavor to it. Ru comes in to challenge the girls to say something extra sassy and react to a big, Moonstruck-style, “Schnap out of it!” slap. (Think season two’s iconic RuPaul slaps.)

The result is way better than last week’s reading challenge. The digs are sharper, and each queen sells the slap like a pro. (Highlights include Aquaria simply reminding Ru that she was born in 1996 — ugh! — and Monet telling Ru that she wears it “eh … “) The winner is Asia O’Hara, who not only reads Ru for hitting like a girl, not looking one, but she took an actual accidental slap from Ru and gave us the best reaction of the bunch. At one point she marched around holding her back. It was art.

The gals this week are tasked with telling the story of the Dark Lady’s career in a new (unauthorized) Rusical. Each queen will be assigned a different incarnation of the legend’s 60-year career. And they’ll be singing LIVE. As if that’s not intimidating enough, Cher is one of Ru’s idols, and Mother Darling knows her better than her Wikipedia.

Rehearsing with Todrick Hall is rough. Vixen and Asia struggle with selling Cher; Kam comes across meeker than usual; and Eureka reveals a crippling singing phobia. Her dad wanted her to sing, but she was too nervous. And now singing is a very triggering experience for her. I will say this about Eureka, she really knows how to craft the perfect episode-long arc of overcoming a struggle so each performance feels like a triumph over something. She’s basically her own story editor, and you gotta admire that.

Speaking of Eureka, Asia pulls the Vixen aside to have a little chat. In one of my favorite scenes on this show, they have a candid conversation about Vixen’s attitude. Not unlike this week’s Real Housewives of New York, where Bethenny confronts Dorinda about her drinking problem, Asia discusses Vixen’s attitude problem with care and kindness. In an interview, Asia perfectly encapsulates my own feelings of the Vixen: “Is Vixen handling it the wrong way? Yes. Do I understand where the Vixen is coming from? Absolutely.”

Asia cuts right to the heart of the matter, positing that Vixen’s issues with Eureka are actually more reflective of Vixen’s past than her present. Perhaps Vixen’s lifelong struggle — and the racism rampant in the gay community she alluded to in a recent story about bartenders complaining about “south side trash ruining Pride” — has her reacting so strongly to the judges’ fawning over the likes of Eureka and Aquaria.

The Rusical itself is fun, but the performances vary in quality. Kameron opens the show as ‘60s Cher, and it’s not bad! She’s got the voice and mannerisms DOWN, but I still think it lacks a little of Cher’s star presence. If you squint just a little, you might’ve thought it was Chad Michaels after taking a little too much Benadryl.

Monet gets lucky with the meatiest comedy material, skewering Cher’s Native American headdress with a high-energy tune about cultural appropriation. She gives it her all, and the result is a crisp, charming homage that still feels very Monet.

The Vixen has a tougher time with Variety Show Cher. Wearing a less iconic lewk (sure, her duet with the Jackson 5 was memorable, but it’s not as immediately accessible as the “If I Could Turn Back Time” leather and mesh, for example — Vixen barely serves any Cher. It’s disco Vixen, but not much else.

Speaking of disco, that’s Aquaria’s Cher incarnation, and it’s fine. She looks great as a golden goddess, and she incorporates a quick joke about the cumbersome costume that she ad libbed in rehearsals. Asia came out next as movie star Cher, wearing the Moonstruck grey streak well. Her actual performance though was lacking. There wasn’t a ton of Cher, and it all just felt sloppy. She made a little joke about messing up the words, which is a better reaction than just sweating through it, but the whole thing just felt deflated.

Eureka — so brave — conquered her fear of live singing. She started a little timid, but blossomed into a rollicking take on the rocking “Turn Back Time” diva. Cracker is given the most complex choreo, juggling a vocoder mic to tell the story of Cher’s big turn of the millennium comeback with “Believe.” 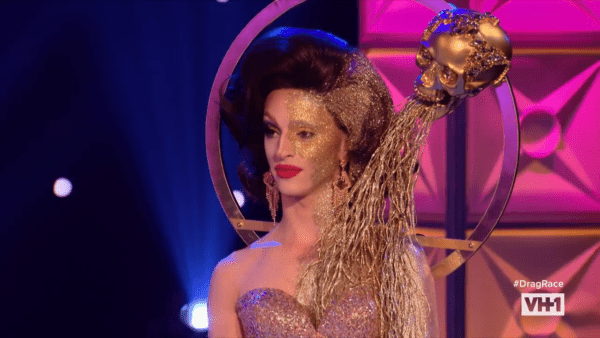 After a sparkling glitter-themed runway, the judges (including guests Andrew Rannells and Billy Eichner) offer some mostly predictable feedback. They tell Kam she killed both the opening number and her sparkling harem pant. Monet’s Cher was definitely a hit but her glitter runway wasn’t “Dressed to Kill.” The judges clock some visible tape, even though her makeup and overall concept are strong.

Vixen’s colorful construction foam gown is gorgeous, but her Cher wasn’t up to snuff. Of course, Aquaria gets praise for her runway — a golden, Baroque fantasy that would’ve been right at home at this week’s Met Gala red carpet — but her Cher was missing some quintessential Cher-isms as well.

Asia’s Cher probably gets read the most harshly, but the judges love her sparkly clown getup (minus the suede shoes). Eureka looks stunning, but the judges think her makeup is a bit too much. Michelle tells her the performance felt “temporary.” (It’s so obvious she meant tentative, but Michelle stubbornly refuses to accept Ru’s correction.) Finally, the judges praise Cracker’s creative glitter look, which included a glitter skull puking glitter on her already glittery ensemble, but, in the only bit of surprising judging, they feel like she went too far with her Cher. (How that’s even possible in a drag competition, I’ll never know.)

Kam gets the win, and Vixen and Asia are facing off in the lip sync. Thankfully, it’s one of the better battles. Set to Deee-Lite’s “Groove Is In the Heart,” it feels like two friends putting on a great show together. I mean, is it possible to NOT have a great time to that song?

After multiple times in the bottom, it’s Vixen’s time to go. I know she wasn’t a universally beloved queen (yes, I read the comments), but I do think her presence introduced a number of interesting perspectives to the competition. I admire her charisma, uniqueness and talent, but it’s her nerve that will be most missed.

That leaves our top six. Where does everyone stand? Find out in our rankings below, and leave your rankings in the comments!

1. Eureka’s ascension continues. She is consistently a strong performer, and the judges clearly love her. Her drag is so polished and singularly Eureka, and she does steal attention every time she’s on stage (which is a good thing, despite the Vixen’s gripes). With former frontrunners like Asia and Cracker slipping, it feels like Eureka and Aquaria in a race to the top. Eureka has more of an all-around edge.

2. I think we might have another cross-over star on our hands with Aquaria. Like Carmen Carrera and Milk before her, I think Aquaria could realistically break into the fashion world in a big way. There is this alien element to her that is fascinating to look at. Again, she surprised with a little humor, though her singing left a lot to be desired.

3. This should’ve been a bigger week for Miz Cracker than it was. Both the challenge and the runway catered to her strong suits, and, if you watched this episode on mute, you’d think she excelled. The judges just weren’t feeling the lovable little weirdo. I still think she’s got a chance to surge in the latter half of the competition, but there’s a chance she never figures out how to fully sell her quirks.

4. This week might be Kameron’s peak. Maybe I’m reading too much into the preview for next week, but for a queen to already be so in her head just when the competition is heating up is not a good look. Still, Kam is solid on the runway, and definitely gave the best Cher of the night.

5. Even when Monet looks great, she still don’t look great. Every other remaining queen BRINGS it to the runway, and no matter how funny or charismatic Monet is, that’s going to catch up with her. She may be able to limp to top four, but her wardrobe will be her undoing.

6. I really, really, really would love to see Asia in our top three. It’s not completely outside the realm of possibility, but she’s so hit or miss. Depending on the next few challenges, Asia could crush or be crushed. She’s got all the tools to make it to the end, but based on this week, she’s falling behind.

7. The thing about the Vixen’s attitude, regardless whether you feel it’s justified or not, is it’s EXHAUSTING to maintain that level of heightened emotion. I could feel Vixen burning out a bit, and it seemed like her time to go. I appreciated what she brought to the competition, and I do think she will inspire more girls. Like Cher in one of my favorite so-bad-it’s-good films, Burlesque, we haven’t seen the last of the Vixen. She’d be a hand grenade to throw into a future All Stars season.