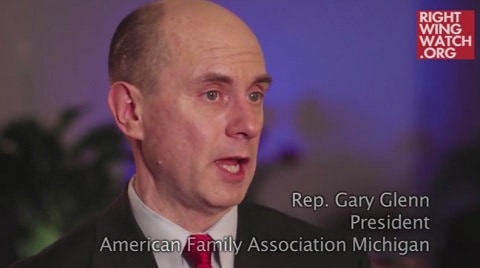 In a clip from bigot Janet Porter’s documentary Light Wins: How To Overcome The Criminalization Of Christianity, Glenn says:

“If some young person hears at school that it’s okay to be gay and then comes down with a fatal disease as a result, school officials should be held legally liable, individually and in their official capacities, financially and maybe even criminal.”

Glenn is joined by Judith A. Reisman who ominously warns that teaching about homosexuality is “grooming the child for sexual activity,” an unidentified man concerned about placing one’s genitals in “the tract where you expel waste” and David Barton who claims that God does not approve of Christians who do not speak out in opposition to homosexuality.

Last year, Porter warned hetero families to steer clear of Disney World during its Gay Days out of fear that children may be exposed to “public displays of perversion.”

Previous Post: « The Science Behind Why Getting Kicked in the Balls Hurts: VIDEO
Next Post: Robyn and La Bagatelle Magique Would Like You to Know That ‘Love is Free’ »