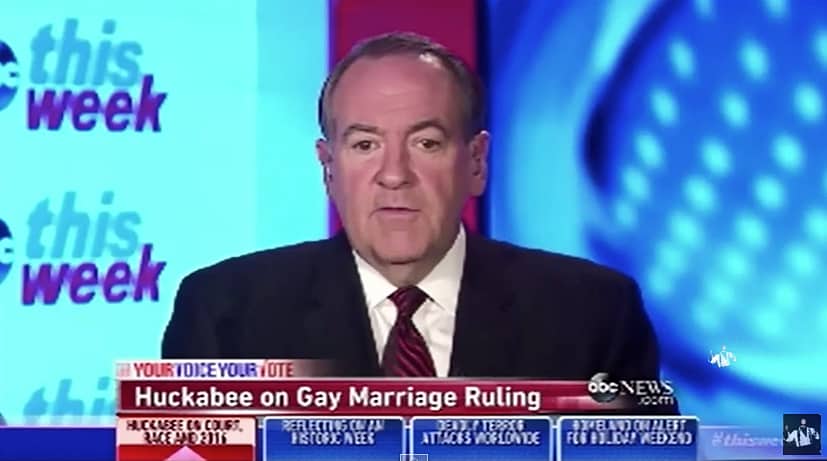 Huckabee said that SCOTUS ruled for “marriage redefinition” and warned that people of faith would now face discrimination:

“This case wasn’t so much about a matter of marriage equality, it was marriage redefinition…and I think people have to say if you’re going to have a new celebration that you’re not going to discriminate may I ask are we going to now discriminate against people of conscience, people of faith who may disagree with this ruling. Are they going to be forced, either out of business, like the florist, the caterers, the photographers, like the CEO of Mozilla who was run out of his job because of a personal contribution to support a proposition in California that actually won on the ballot? Are we gonna trade one level of what’s called discrimination for a new level of discrimination against people of faith?”

When Stephanopoulos asked him if he is calling for civil disobedience, Huckabee said that many religious people wouldn’t have a choice and cited MLK Jr’s writing as justification for refusals to obey orders that they marry gay couples:

“I don’t think a lot of pastors and Christian schools are going to have a choice. They’re either going to follow God, their conscience, and what they truly believe the scripture teaches them, or they will follow civil law. They’ll go the path of Dr. Martin Luther King, who in his brilliant essay, the Letters from a Birmingham Jail reminded us — based on what St. Augustine said — that an unjust law is no law at all. And I do think we’re going to see a lot of pastors who will have to make this tough decision. You’re going to see it on the part of Christian business owners, you’ll see it on the part of Christian university presidents, Christian school administrators.”

“If they have an conscientious objection I think they should be excused. I’m not sure that every governor and every attorney general should just say ‘Well, it’s the law of the land because there is no enabling legislation.'”

Finally, Huckabee said that because Obama lit up the White House in rainbow lights nobody should say anything when he puts up a nativity scene if he becomes president.

“When the president lit up the White House the other night with rainbow colors, I guess that’s his prerogative. If I become president I just want to remind people that please don’t complain if I were to put a nativity scene out during Christmas and say if it’s my house I get to do with it what I wish despite what other people around the country may feel about it.”

He repeated those assertions on a Friday appearance on FOX News with Megyn Kelly.

Kelly tersely told Huckabee it was time for him to accept the ruling:

“It’s the Supreme Court’s job to interpret the Constitution and tell us what it means. And like it or not, they get the final say unless the people decide to pass a constitutional amendment.”