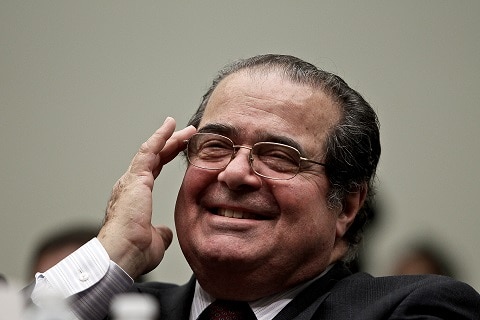 Yesterday morning, Supreme Court Justice Antonin Scalia once again protested against same-sex marriage during a reading from the bench in a death penalty case, reports MSNBC.

During the reading, Scalia said that “Last Friday, this court took away from the people the right to decide on same-sex marriage on the basis of their own policy preferences.” He went on to add that, “unlike [same-sex marriage]…the death penalty is approved by the constitution.”

Scalia was taking a shot at Justices Ruth Bader Ginsburg and Stephen Breyer (right) for suggesting in their written dissent to the case at hand that the death penalty is unconstitutional.

Normal SCOTUS protocol is for the justice who is in the majority to summarize his or her opinion from the bench. Although a dissenting justice may read aloud if he or she feels strongly about their protest, this is a rare occurrence.

Although actually in the majority in the death penalty case, Scalia said he found it “wryly amusing” that Justices Ruth Bader Ginsburg and Stephen Breyer cited the average 18 year delay before an execution as one reason it was unconstitutional. “Maybe we should celebrate that two justices are willing to kill the death penalty outright instead of pecking it to death,” he added.

Writing on behalf of himself and Ginsburg in relation to the death penalty case, Breyer noted that “the studies bear out my own view, reached after considering thousands of death penalty cases and last-minute petitions over the course of more than 20 years…I would ask for full briefing on a more basic question: whether the death penalty violates the Constitution.”