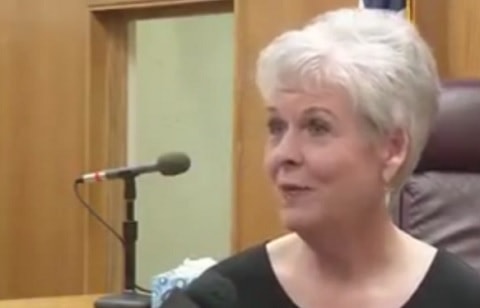 A Mississippi clerk has announced her resignation citing the SCOTUS decision to legalize same-sex marriage, reports the Clarion-Ledger.

In a letter to the board of supervisors, Grenada County Circuit Clerk Linda Barnette wrote:

“The Supreme Court’s decision violates my core values as a Christian.

“My final authority is the Bible. I cannot in all good conscience issue marriage licenses to same-sex couples under my name because the Bible clearly teaches that homosexuality is contrary to God’s plan and purpose for marriage and family.”

A clerk for 24 years, Barnette’s husband worked as a pastor with Billy Graham Ministries for many years.

“I was kind of shocked, I don’t know her personally but I never thought she was that way.

“She’s given marriage licenses to people who have committed adultery and stolen and lied, and when their parents haven’t approved… it’s just crazy the way she’s thinking. That’s her job and she’s not there to judge people.”

Yesterday, Jim Perry and his longtime partner were told that issuing licenses for same-sex marriages was against the religious beliefs of the Simpson County Clerk’s office.

An employee of the office told Perry that it was “against their religion” and they’re not going to issue them out of that office.

In Jones County, Circuit Clerk Bart Gavin said yesterday that he and a group of “concerned circuit clerks” will be in Jackson today to meet with the Attorney General for clarification on some of the issues facing the circuit clerks’ offices.

“The stay hasn’t been lifted, so we don’t know if we marry someone, will it be valid down the line if they want to get a divorce, or if one of them passes away and that’s when they find out the marriage wasn’t valid.

“We need to know what forms to use, how are we to do it, what laws to follow, what to do if they’re under 18, where are we on all this? We’re just clerks, we don’t make decisions of law. The mandate hasn’t even been given by the Supreme Court to go forward.”

Watch a report on Barnette’s resignation below: