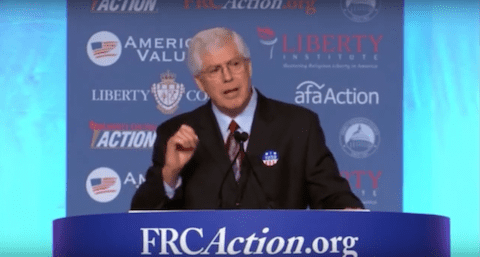 “Back in the 1930s, it began with the Jews, where they were evicted from public employment, then boycotted in their private employment, then stigmatized and that led to the gas chambers. This is the new persecution of Christians here in this country.”

Staver is fiercely advocating for his client, calling for her right to have her religious freedom be accommodated. However, Staver’s push wasn’t enough to keep the law from booking Davis on contempt of court.

In related news, Staver has declared the marriage licenses issued to same-sex couples by her deputies this morning to be “invalid” and “not worth the paper they’re written on.”

Listen to Staver’s heinous comparison of Davis’s situation, which she brought on herself, to the actual tyranny Jews and millions of minorities suffered under the Nazi regime, below: