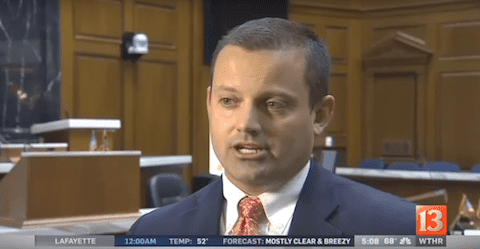 Indiana House Majority Leader Judson “Jud” McMillin, who cosponsored the state’s contentious religious freedom law, resigned Tuesday after an explicit video starring McMillin was sent via text message from his phone to all of his phone contacts, including legislative officials.

McMillin’s resignation comes after the house leader reached out to his phone contacts explaining his phone was stolen in Canada and to disregard any messages they received within the period that it went missing. However, an explicit video of McMillin with another woman, who isn’t his wife, surfaced and McMillin resigned without publicly acknowledging the video. However, this isn’t the first time McMillin has resigned over sexual misconduct; an expose on McMillin revealed that in 2011 the lawmaker attempted to coerce a domestic violence victim into a sexual relationship amongst damning petty theft allegations and vehicular homicide charges.

McMillin is known for his staunch anti-gay views, opposing nondiscrimination protections for LGBT people and speaking out against marriage equality. McMillin listed fighting marriage equality as his top issue, hypocritically stating that he will “protect the integrity of the institution of marriage,” citing the value of family:

“In southeastern Indiana the family has always been the foundation of our strength of community. Our relationships with our wives, husbands, parents, children, siblings and other loved ones provides the glue that binds our common purpose. In these times of turmoil the rest of the country could learn something from our example.”

McMillin has since remained mum, avoiding public statements and ignoring email inquiries regarding his resignation and the video. It appears the signing of Indiana’s religious freedom bill has had an adverse effect on its supporters as Indiana based business Gen Con threatened to relocate because of the bill, potentially robbing the state of $67 million in revenue while anti-gay religious freedom darlings Memories Pizza, an anti-gay Indiana establishment that refused to cater same-sex weddings, were tricked by a gay couple and their wedding guests into catering their wedding.

Watch WTHR 13’s news coverage regarding McMillin’s resignation, including street interviews with locals on their thoughts about the politician’s resignation and video, below: