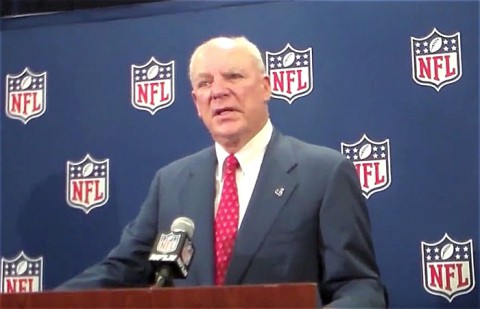 Late last week, we told you about Houston Texans’ owner Bob McNair and his $10,000 donation to a group opposed to Houston’s Equal Rights Ordinance (HERO). Today, McNair released a statement saying that he has asked for that donation back because the group involved, the Campaign for Houston, attributed “certain statements of belief” to him to which he says he does not prescribe.

McNair insists he does “not believe in or tolerate personal or professional discrimination of any kind.” However, McNair did not retract his opposition to HERO.

I recently made a personal contribution to Campaign for Houston because my thorough review of the HERO ordinance led me to believe that a thoughtful rewrite would provide a better ordinance that would provide strong non-discrimination protections for all Houstonians, which I would support, and would be less divisive of our city.

It was on these principles that I made my personal contribution to Campaign for Houston. To my great dismay, Campaign for Houston made numerous unauthorized statements about my opposition to HERO in print, broadcast and social media – including attributing certain statements of belief to me. Their actions and statements were never discussed with nor approved by me. Therefore I instructed the Campaign to return my contribution.

I do not believe in or tolerate personal or professional discrimination of any kind. I also believe that we Houstonians should have an ordinance that unites our community and provides a bold statement of non-discrimination. I encourage all Houstonians to vote on November 3.

Robert F. Kennedy once said, “Few will have the greatness to bend history itself; but each of us can work together to change a small portion of events, and in the total of those acts will be written the history of our generation.”

Among those who criticized McNair for his opposition to HERO was former Minnesota Viking Chris Kluwe, who called McNair’s donation equivalent to “spraying a whirlwind of fecal chunks all over the [NFL’s] PR efforts [to clean up its image with regards to LBGT issues] like an incontinent water buffalo after an ex-lax smoothie.”

On Friday Kluwe took a victory lap on Twitter:

Sometimes a naughty word is just what the doctor ordered. Not all the time. But sometimes.

Also, good on Bob McNair to realize he screwed up. It's never too late to try to undo your mistakes.

Now the important part is to make sure #HERO gets passed, and a whole host of people receive the protections others take for granted.

McNair previously issued a statement on his opposition to HERO, saying he felt it divided more than united Houston’s citizens:

“Houston is a city known for the diversity and exceptionalism of its hard working people. We are also a city that works to ensure that everyone is treated respectfully and fairly. I strongly believe that everyone who lives or works in or visits Houston should be treated with the utmost dignity and respect. Because of the way the HERO ordinance is written, it has begun to separate rather than unite our community. This problem can be solved by defeating the current bill in November, thoughtfully rewriting it and then resubmitting it to the voters.”

HERO will go to a vote on November 3.

Previous Post: « What Will Humans Look Like in 1,000 Years? ASAPScience Makes Its Predictions – WATCH
Next Post: Is This How You Reacted to Adele’s New Music Video ‘Hello’? – WATCH »