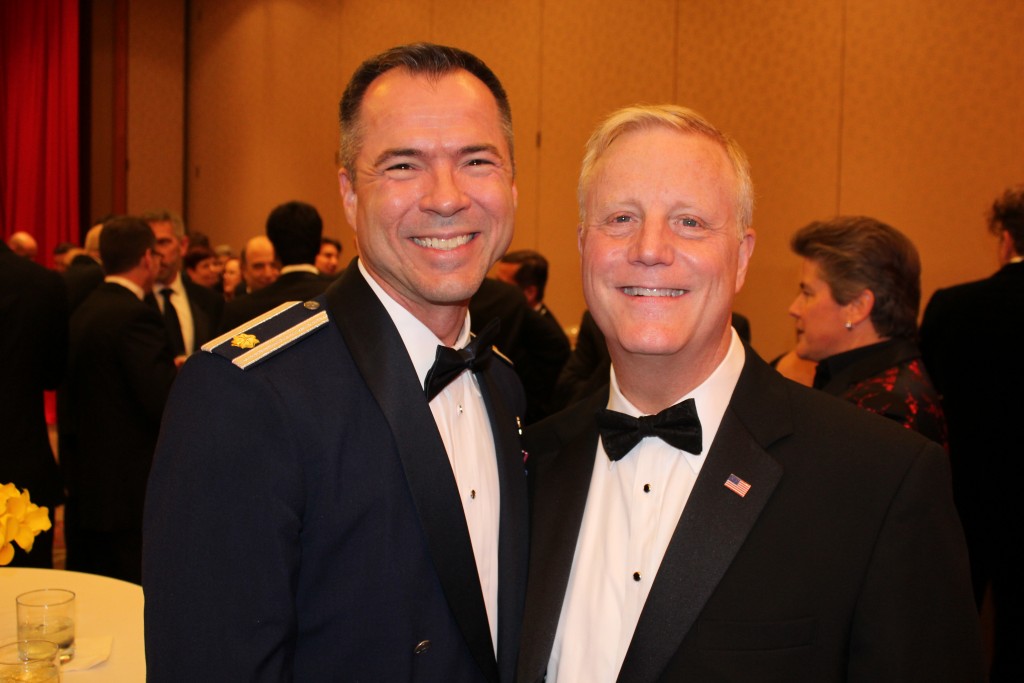 The couple plans an elaborate, “Texas-sized” wedding near Dallas that promises to be a media spectacle. Their ceremony will be attended by more than 325 people, including numerous current and former elected officials, according to a 10-page press release.

Phariss’ 5-year-old nephew will present the couple their wedding rings atop American flags that flew over the U.S. Capitol on the days when the Supreme Court heard oral arguments and issued its ruling in Obergefell v. Hodges. The flags were obtained with the help of Sen. Harry Reid.

“Today is the happiest day of our lives,” the couple said in the release. “We have married the person we love more than anything else in the world and we have done so in the state we love and call home.” 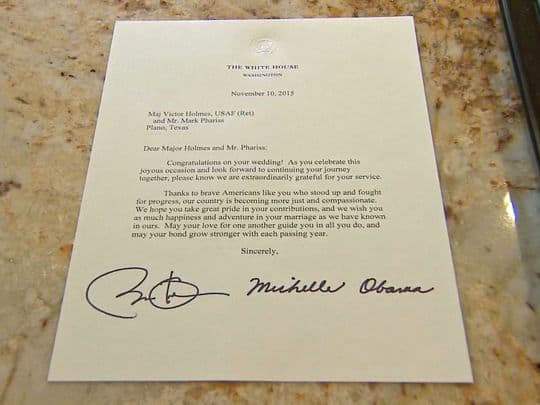 Phariss, an attorney, and Holmes, who spent 23 years in the Air Force before retiring as a major, met in 1997. Joined by DeLeon and Dimetman, Holmes and Phariss filed DeLeon v. Perry in October 2013. In February 2014, a federal district judge struck down Texas’ marriage ban as unconstitutional, but stayed his decision. Then-Attorney General Greg Abbott appealed to the 5th U.S. Circuit Court, which heard oral arguments in January but didn’t issue a decision until after the Supreme Court’s ruling in Obergefell.

Phariss became good friends with now-Gov. Abbott, who vigorously defended the ban, when they attended law school together at Vanderbilt University. In fact, Phariss even flew to Houston to visit Abbott’s bedside after he was left paralyzed by a falling tree limb. But Phariss said recently that the couple didn’t invite Abbott to their wedding.

“We want people there who are supportive,” Phariss told The New Civil Rights Movement. “We don’t want a zoo for a wedding, and having Greg there, while that would be a plus in terms of how we’re moving people along, he would never come anyway.”

Watch a report on the couple’s wedding plans from WFAA-TV, and read their full press release, below.

Mark Phariss and Vic Holmes, Plaintiffs Who Successfully Sued Texas in DeLeon v. Perry For Right to Marry, Wed After More Than 18 Years Together in Frisco, Texas

What:  Mark Phariss & Vic Holmes were married today, Saturday, November 21, 2015, after over 18 years together by former Congressman Charles Gonzalez in the presence of over 325 friends and family – a true Texas-sized wedding.

Quotes from some who attended the wedding:

Quotes from some who couldn’t attend the wedding:

Some Facts About the Wedding:

Phariss and Holmes have been together more than 18 years.   They met in the spring of 1997 at the San Antonio home of two friends.  At the time, Holmes was in the Air Force and stationed in San Antonio.  Phariss was and remains an attorney licensed to practice law in Texas.  They quickly developed a friendship that blossomed into a dating relationship.  On August 9, 1997, they went on their first date at the home of Guillermo Nicolas for a Human Rights Campaign fundraiser; they celebrate August 9 as their anniversary.  After dating for several months, Holmes and Phariss started living together.  While living together, Holmes, who had joined the Air Force when he was eighteen, began a military program at Fort Sam Houston to become a physician’s assistant.  Upon completing the program, the Air Force stationed Holmes at different bases throughout the country – including San Diego, Biloxi, Mississippi, Little Rock, Arkansas, and Wichita Falls, Texas.  Because Phariss continued to live and work in Texas, he and Holmes spent the next eleven years commuting in a long-distance relationship. Depending on where Holmes was serving, Phariss and Holmes would travel as often as every week to every few weeks to see each other.  Holmes honorably served our nation for nearly twenty-three years and retired as a Major at the end of 2010.  Since Holmes retired from the military, he and Phariss have again shared a home, now in Plano,Texas.   On October 3, 2013, they applied for a marriage license from the Bexar County Clerk and were refused, prompting Phariss and Holmes to sue the State of Texas.  After the Supreme Court’s decision in Obergefell, Phariss and Holmes re-applied for a marriage license.  On September 25, 2015, Phariss and Holmes traveled to San Antonio and applied for a marriage license with the same County Clerk’s office.  This time they received a marriage license, one personally given to them by the Bexar County Clerk Gerry Rickhoff, a Republican who supports marriage equality.  Former Congressman Charlie Gonzalez, the officiant and Phariss and Holmes’ wedding, and Frank Stenger, one of their Akin Gump attorneys, were also present for the issuance of the marriage license.

10/3/2013 – Phariss & Holmes apply for a marriage license in the Bexar County Clerk’s office and are refused.

2/12/2014 – The preliminary injunction hearing was held before Judge Orlando Garcia, a federal judge.

7/1/2015 – The 5th Circuit remanded the case back to Judge Orlando Garcia to issue a final order in DeLeon v. Perry.

7/7/2015 – Judge Orlando Garcia entered a Final Judgment in DeLeon v. Perry, ruling that any ban on same-sex marriages in the State of Texas violated the Due Process and Equal Protection clauses of the 14th amendment and entered a permanent injunction barring the state from enforcing its prior ban.