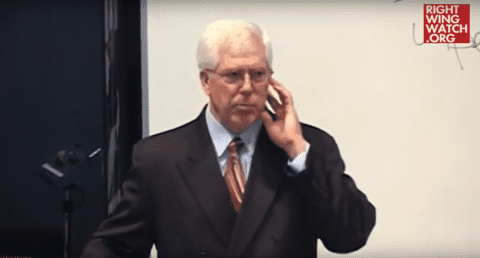 Mat Staver of listed hate group Liberty Counsel has said the lighting of the White House in rainbow colors to celebrate the gay marriage victory at the Supreme Court was “the greatest attack in our modern times on the church that we have ever seen.”

Speaking at “Standing for Jesus Christ Conference” in Dela

ware, persecuted Staver was discussing his sterling work defending four times married Kim Davis, the Kentucky clerk who recently showed her love for God by refusing to do her job and issue marriage licenses to same-sex couples.

According to Staver, Davis was doing righteous work by sending a message that it is not acceptable to “just cleanse our elected officials of Christians or those who believe in what everyone has believed through millennia of human history that marriage is a union of a man and a woman because five people – five people! – disagree with God.”

RELATED: Mat Staver: Forcing Kim Davis to Do Her Job Is Like Requiring Her ‘To Grant a License to Sodomize Children’ – LISTEN

Attacking the White House display of pride, he fumed that the entire world was shocked by the “deep solar plexus punch in their gut.”

Listen to Staver’s worries via Right Wing Watch below.

Previous Post: « Grab Your Poles! Here’s your Gay Ski Week Round Up
Next Post: Eagles of Death Metal Open Up About the Paris Terror Attacks: WATCH »