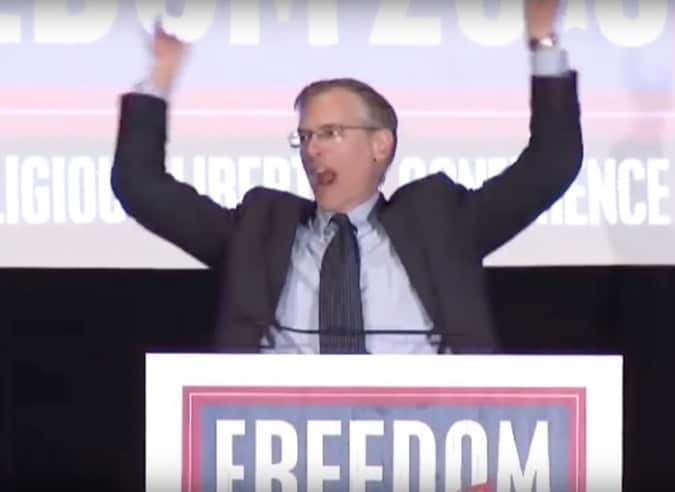 Notorious anti-gay pastor Kevin Swanson says that if Hillary Clinton is elected president she will lead “tremendous majorities of American kids…down the track towards homosexuality.”

As we previously reported, Swanson hosted Ted Cruz, Mike Huckabee and Bobby Jindal at a November “conference” in which he had an epic meltdown about how America is “messed up” because it has become a more tolerant and accepting place for LGBT people over the years.

RELATED: ‘Kill the Gays’ Pastor Says ‘We Are Messed Up’, Proves It with Epic Meltdown: WATCH

Swanson’s latest anti-gay remarks were given on his “Generations Radio” program on Monday. Speaking of the supposed perils America faces if it does not repent for its sins, Swanson asks,

“Why wouldn’t Hillary Clinton get full rein upon this nation to continue the destructive pattern, destroy the social fabric of the nation — the family, of course — so that of course there will be 75 percent of kids born outside of wedlock to single mothers by the year 2030, so to be sure that tremendous majorities of American kids are taken down the track towards homosexuality, towards the destruction of sexuality with pornography habits, illegitimate divorce, the shack-up rates being 30 times what they were in 1970 and so forth?”

Swanson brought up Hillary Clinton after discussing a federal court case in which a Catholic school fired a gay employee because he was married. The judge in that case ruled in favor of the employee. Right Wing Watch notes:

Swanson warned that this was all part of the “preparation for the Greek form of education, which, as you know, involves whatever’s going on in gymnasia, very, very ugly stuff” and that the nation is “going in the direction of Harry Potter’s mentor and Hiccup’s mentor in ‘How to Train Your Dragon,’” whom he says are gay.

The only way to save America, he said, is to keep enough kids out of public schools, which are teaching them to be “polytheists and socialists” and to get enough Americans to repent, otherwise God will fail to “have mercy on this nation” and allow Clinton to be elected president.