'Kill The Gays' Pastor Says 'We Are Messed Up', Proves It With Epic Meltdown: WATCH - Towleroad Gay News 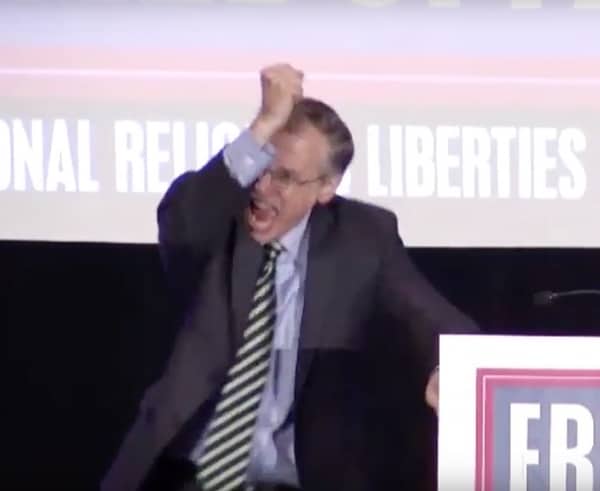 We’ve been writing about Kevin Swanson, who hosted Ted Cruz, Mike Huckabee, and Bobby Jindal at the National Religious Liberties Conference in Des Moines, Iowa yesterday and today. Swanson has made some pretty insane remarks in the past.

But you have GOT TO WATCH this insane speech Swanson gave at the conference yesterday after interviewing Huckabee and Jindal.

“There are families, we’re talking Christian families, pastors’ families, elders’ families from good, godly churches, whose sons are rebelling, hanging out with homosexuals and getting married and the parents are invited. What would you do if that was the case? Here is what I would do: sackcloth and ashes at the entrance to the church and I’d sit in cow manure and I’d spread it all over my body. That is what I would do and I’m not kidding, I’m not laughing….I’m grieving, I’m mourning, I’m pointing out the problem.

“I tell you don’t do it. Sack cloth and ashes. This is what America needs. America needs to hear the message. We are messed up.

Watch, and figure out for yourselves who’s messed up:

Swanson has also said that the government should put gay people to death, warned that the Girl Scouts and the movie “Frozen” turn girls into lesbians and blamed natural disasters on gay people and women who wear pantsSwanson has also said that churches accepting gay couples will lead to the persecution, imprisonment and murder of Christians, and wished for the good ole days when country singer Kacey Musgraves would have been hanged for her pro-gay lyrics.

This is the guy with whom the Republican candidates are spending their time.