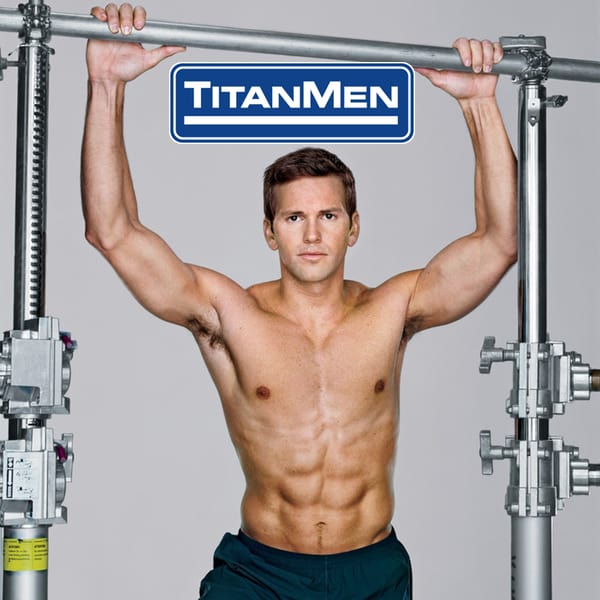 Schock is getting pounded by legal debt, Politico reported on Thursday:

Former Rep. Aaron Schock has just roughly $558,000 left in his campaign account but owes a major law firm a lot more than that, according to a recently filed campaign finance report.

The Illinois Republican, who has been in the crosshairs of the Justice Department and FBI for alleged misspending of campaign and government dollars, owes $746,985.45 to Jones Day, a firm with a large Washington presence. Jones Day represented Schock when he resigned from Congress.

Schock’s problems began just about a year ago when the lavish decoration of his office, which was said to be modeled after Downton Abbey, came under scrutiny. The attention unleashed a tidal wave of questions about the congressman with abs‘ lifestyle and spending which culminated in his resignation and the investigation for which he now owes hundreds of thousands of dollars.

Back to business. TitanMen writes, in a press release:

The boyishly handsome and muscular 34-year-old Republican became a media sensation thanks to his Instagram account, which features homoerotic images of Schock on expensive and exotic vacations, his chiseled physique on display in extreme sports, and for his dapper sense of fashion.

Aaron Schock stands 5’8″ tall and weighs in at 165 pounds of lean muscle. His impressive six-pack abs earned him a cover and in-depth interview in Men’s Health magazine, where he revealed the secret to his impressive physique: a grueling daily workout routine that includes 60-75 minutes of strength training followed by a five-mile run at 6:30 am.

“TitanMen has a history of signing iconically handsome men with both brains and brawn, and Aaron Schock fits that profile to a ‘T’,” said TitanMen Vice-President and managing partner Keith Webb. “Despite Schock’s scandal over allegedly misappropriating campaign funds, he has so much more to offer our fans. What we’re offering is a win-win situation, giving him the opportunity to break free and come out in a whole new world!”

Schock was opposed to same-sex marriage throughout his time in office. He also supported a federal marriage amendment, opposed repeal of ‘Don’t Ask, Don’t Tell’, opposee the repeal of DOMA and voted against adding sexual orientation to federal hate crimes statutes.

Schock has said he is not gay. Of course, money can be very persuasive.

ps – here’s the offer link, for those interested in following it:

Previous Post: « Why Did Bill Maher Give a Major Platform to Dangerous AIDS Quack Samir Chachoua?
Next Post: Liz Cheney to Run for Congress in Wyoming, Again »