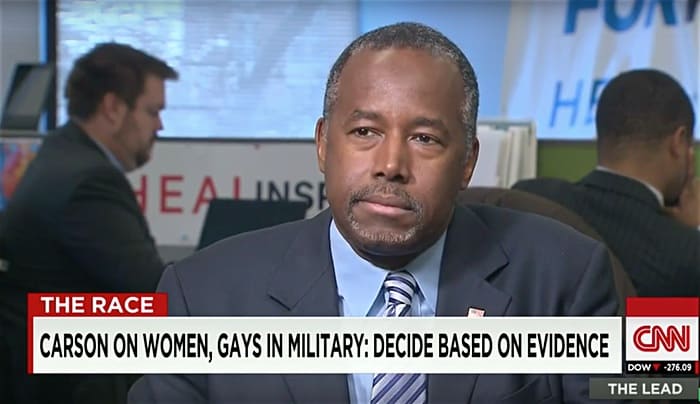 Dees said they would have to consider the role of women in combat, and the physical realities therein: “Everyone is not good at everything.”

LAST NIGHT: Lesbian Confronts Ben Carson: ‘Do You Think I Chose to Be Gay?’ – WATCH

Carson recently reiterated his opposition to transgender service members and expressed an interest in returning to the days of “Don’t Ask, Don’t Tell” and Tapper took on that topic as well.

Dees, ignoring the years of military studies that preceded the lifting of ‘Don’t Ask, Don’t Tell’ and the lack of any current evidence that it has disrupted anything, suggested that the current policy of gays serving openly in the military is not working:

Tapper then asked Carson if he would consider returning to a ban on gay servicemembers:

Previous Post: « Trevor Noah: ‘Texas Is Out of the Closet as Being Super Gay for Guns’ – WATCH
Next Post: This Analysis of Donald Trump’s Speech Patterns May Explain His Unlikely Rise: WATCH »