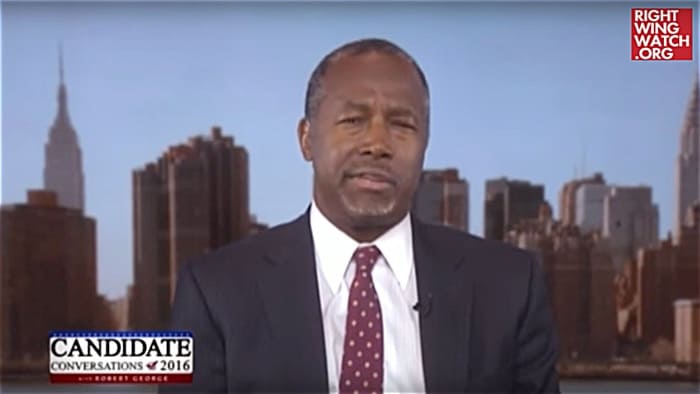 GOP presidential hopeful Dr. Ben Carson sat down with Witherspoon Institute’s Matthew Franck for an interview on the Catholic network EWTN over the weekend. He was asked about initiatives around the country to protect the rights of transgender students in schools.

Carson, who said he thinks it’s “ridiculous” that LGBT people should get rights, also called LGBT people “abnormal” who are ruining it for everyone else, Right Wing Watch reports.

“I mean, it’s beyond ridiculous that you take the most abnormal situation and then you make everyone else conform to it. That doesn’t make any sense whatsoever. That’s one of the very reasons that I have been an outspoken opponent of things like gay marriage. I don’t have any problem with gay people doing anything they want to do. You know, it’s a free country, there’s freedom of association. However, when you now impose your value system on everybody else and change fundamental definitions and principles of society, I have a big problem with that. Everybody is equal, everybody has equal rights, but nobody gets extra rights. And when we start trying to impose the extra rights based on a few people who perhaps are abnormal, where does that lead?”

Previous Post: « Chinese Firm Takes Stake in Grindr for $93 Million
Next Post: Adele is About to Go for a ‘Carpool Karaoke’ Ride with James Corden: WATCH »