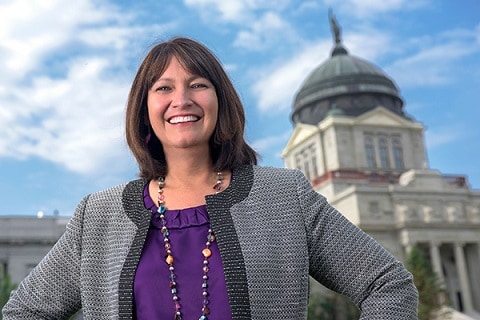 Juneau, who was elected state superintendent of Public Instruction in 2008 and re-elected in 2012, announced her candidacy for the only state House of Representatives seat against Republican incumbent Ryan Zinke on Wednesday.

“Her run for Congress is historic in many ways, which is why we’re seeing major endorsements and unprecedented excitement from every corner of the state. She’s the first female American Indian to win statewide office, twice. Denise will be the first woman Montanans sent to Congress in 75 years. Denise is proof that anyone can go from Head Start to Harvard, from a small town to the U.S. Capitol. In Congress, Denise will be an independent voice who puts all Montanans first.”

Welcoming the news, David Herrera, board member for the Western Montana LGBT Community Center in Missoula, said he hopes that Juneau’s sexual orientation will be a non-issue for voters.

Previous Post: « Wednesday Night News: Donald Trump, ‘Angels in America’, HIV, Trans Pilots, Hump Day Hotness
Next Post: Look at the Desperate Measures Gay Men in the UK are Taking to Get Their Hands on PrEP »