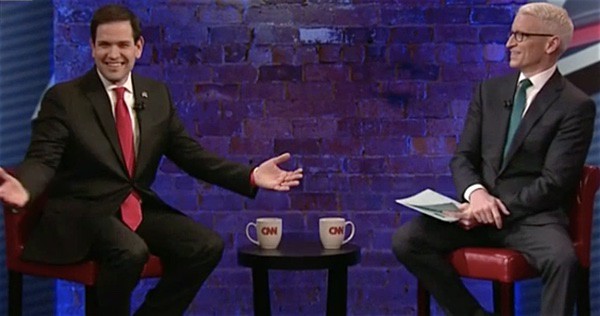 In response to a question from Anderson Cooper at last night’s Republican Town Hall, Marco Rubio denied he’s ever been to a rave despite his love for EDM (electronic dance music).

“No! I’ve never been to a rave. No….It’s a Republican primary, Anderson….I listen to [EDM], I think I’m a little too old to be going to a rave. Although I have the boots for it…In the last few years what’s happened with EDM, you’ve got these DJs that are taking electronic music and overlaying it with tracks from country music, and all sorts of things. So the lyrics are clean, the beats are fun…”

Earlier this month, columnist Wayne Madsen at Public Intelligence Blog claimed that photos from a gay foam party at Miami Beach club Warsaw in the ’90s were “believed” to show Rubio amid the suds, though all that is seen of the alleged Rubio is a half-obscured profile.

.@AndersonCooper: Have you ever been to a rave?@MarcoRubio: No! … It's the Republican primary, Anderson!https://t.co/Rs6jcfKPG2

An industrious YouTuber has now created a Rubio EDM remix featuring the memorized 25-second Obama takedown speech Chris Christie called him out for using at debates: