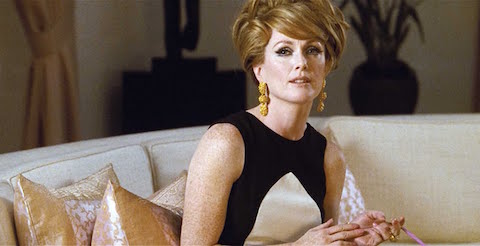 Not only is actress Julianne Moore one of the greatest performers of her generation, but she’s also been one of Hollywood’s most outspoken LGBT advocates. She has appeared in marriage equality ads, been honored with GLAAD’s Excellence in Media Award and has portrayed some of the most nuanced, powerful queer characters in cinema.

In an interview with AfterEllen, Moore said: “I’ve said this a lot, but films don’t influence culture as much as they reflect it. I think the reason we can have a film like this is because these are the kind of families we’re seeing right now; this is not shocking. That said, there was an article on the front page of the New York Times about Don’t Ask, Don’t Tell and they were saying that repealing that act is a major, major thing because what does change opinion is proximity. That if your next door neighbor is gay, if the person in the unit with you is gay, and suddenly you’re like, ‘Oh my gosh, they’ve been here the whole time and I didn’t know they were gay, they’re just like me!’

That’s what changes, that’s what makes people think that this is not other, this is not different. That being said, the fact that the movie presents everything that way is ultimately very helpful. But it’s also generational. My kids are growing up in a world where people have two moms or two dads or two moms or two dads who have split up and re-partnered just like a lot of heterosexual couples. They’re living in a world where all of it is happening. It is not different.”

That’s not the only reason LGBT fans (and filmmakers) love her. Moore’s versatile skills transcend film and TV, comedy and drama, indie flicks and big-screen blockbusters. She won an Academy Award, two Emmys and two Golden Globes. She’s also one of only two women to win the European best actress triple crown at the Berlin, Cannes and Venice film festivals.

Moore drew rave reviews for her performance as a seemingly perfect 1950s suburban housewife in Far From Heaven. The film confronts issues of race and sexual orientation as she deals with her husband (played by Dennis Quaid) hiding his homosexuality, and a blossoming romance with a black man (Dennis Haysbert). The role earned her an Academy Award nomination for Best Actress.

She also appeared in openly gay filmmaker Tom Ford’s directorial debut, A Single Man, alongside Colin Firth. Her character pines for Firth’s gay character, George Falconer, but her longtime friend does not return her feelings. The Advocate asked about Moore’s own experience falling for gay men, and she replied, ”When I was a freshman in college in 1979, there was this hot gay guy that I used to make out with in the hallways of the dorm. My idea about gay was very foggy at the time. He was the first out gay person I’d ever met and he was kissing me, so I didn’t know what was happening.”

Moore played the wife of Annette Bening in the Academy Award Best Picture nominee, The Kids Are All Right. Portraying a parent in a same-sex relationship, she described something she observed to The Guardian in an interview in 2010: “You know what else is really nice, is if you’re in a same-sex relationship, you can’t have a kid by accident, so these children are planned and loved and wanted, well-educated and well-adjusted – and that’s what you want. That’s what we’re all here for, right?”

There’s nothing explicitly queer about the 2012 film Game Change, but it’s hard not to get at least a little smug satisfaction from seeing Moore decked out in Sarah Palin drag making the former Alaskan governor look like a total idiot.

Freeheld provided another opportunity for Moore to explore a complex lesbian relationship as she starred opposite Ellen Page. In an interveiw with Variety, Moore said: “Their personal story shows that love is love. Every relationship is a valid relationship. I hope our film will show that no matter what a person’s sexuality is, they aren’t any different. Laurel and Stacie wanted a house, they wanted a family, they wanted a dog and they just wanted the things in life like everybody wants. They wanted to be treated equal. I really do believe that with education and exposure comes more tolerance. The more we learn about each other in terms of culture, ethnicity, gender, sexuality, the closer we become and the less we are able to discriminate.”

That barely scratches the surface of Moore’s extensive CV, including knockout performances in films like Boogie Nights, The Hours, The Big Lebowski and Still Alice.