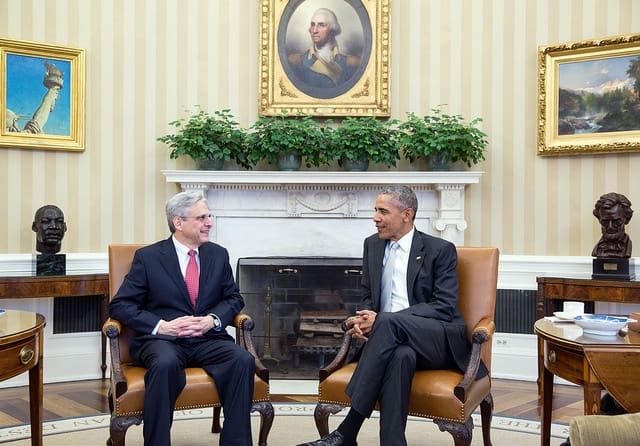 Yesterday, President Obama nominated Merrick Garland, Chief Judge of the D.C. Circuit Court of Appeals, to the seat vacated by the late-Antonin Scalia on the Supreme Court.

Judge Garland is, in many respects, a nominee uniquely suited to the time. Where Senate Republicans are throwing temper tantrums, Judge Garland is calm and rational. Where Republican presidential candidates are falling over themselves to out-hate each other, Judge Garland is the son of immigrants. Where conservatives are demeaning intelligence and education as elitist, Judge Garland is a double Harvard graduate with an unimpeachable record as a jurist. It’s hard to imagine a reasonable argument for not confirming him, let alone not even granting him a hearing. And yet, in a Senate dominated by a party that has long ago tossed reason overboard, Judge Garland’s seeming perfection is meaningless.

Could that be precisely what President Obama was thinking when he nominated a moderate, white, heterosexual man who has received praise from Republicans in the past? He chose someone that was so attractive to even Republicans that their opposition would seem childish, petty, disrespectful, and purely obstructionist. That true-to-life caricature, if deployed properly, could be a powerful political weapon against endangered Republican senators in New Hampshire, Pennsylvania, and Wisconsin. It could engage voters and push the Presidential and down ballot races toward the Democrats. Then again, some have said that Obama was simply nominating the most qualified person. Others have suggested that he caved to Republicans by not nominating a young (Judge Garland is 63) movement progressive. Everyone is guessing. No one knows for sure.

Here is what I know:

Judge Garland may not be any more qualified than Judges Jane Kelly or Goodwin Liu or Paul Watford or Loretta Lynch, but no Republican could argue that he’s “too liberal,” whatever that actually means.

In terms of a judicial record, both in its length and with respect to his well-reasoned opinions, Judge Garland stood out among the others on President Obama’s shortlist. No one could argue he’s not ready.

Judge Garland is more progressive than Justice Scalia. His ascension to the Court could move the Court back to the middle, where it belongs and where it hasn’t been for decades.

Given Republican intransigence, the President had a few paths to consider for his nomination. If he assumed that no nominee would ever get a vote, he could have taken a purely political route and nominated a highly qualified progressive like Goodwin Liu. Judge Liu, an Asian-American jurist, could motivate the liberal base of the Democratic Party in an election year and engage Asian voters. If no one was going to get a vote, the logic goes, you might as well go all in.

But I don’t think the President was willing to give up the ghost of his (and the Senate’s) Constitutional responsibilities so quickly. Nothing about his demeanor and behavior suggests otherwise. Maybe he thought he could shame enough Republicans frightened both of the specter of Donald Trump (who even knows what a Trump nominee would look like?) and their home-state Democratic challengers to get them to hold hearings and a vote. And if he could inspire the base if they don’t, so much the better. Jane Kelly, the former public defender-turned-Eighth Circuit judge could have done this. There aren’t enough women on the Court and even Iowa’s Chuck Grassley likes her. But conservatives had already started running ridiculous, fear mongering, and offensive ads against her. Her nomination debate would have devolved into discussions about the unsympathetic defendants she represented rather than her qualifications.

Judge Garland may have represented the best of both paths. He isn’t old: At 63, he could easily serve on the bench for more than 25 years. His stature and moderation make every Republican argument dead on arrival. Their obstruction could become an election issue that propels Democrats to victory in November. And, at that point, if Hillary Clinton wins (with or without a Democratic Senate), one of two things happen: the Republicans, worried that Clinton would nominate someone younger and more progressive, confirm Judge Garland, or President Obama, deferring to his successor, withdraws Judge Garland’s nomination. Either way, the Court moves left (which isn’t so much of an accomplishment given how far right it has drifted over the last 40 years).

In the end, this is a lot of speculation. But Judge Garland would undoubtedly be a great judge. That he puts Republican hypocrisy and obstructionism in stark relief is icing on the cake.

Previous Post: « Gay Twin Shares Emotional Story of How He and His Brother Came Out to Each Other and to Their Mom: WATCH
Next Post: Gay Syrian Refugee Helps Other LGBT Refugees Find Asylum – WATCH »