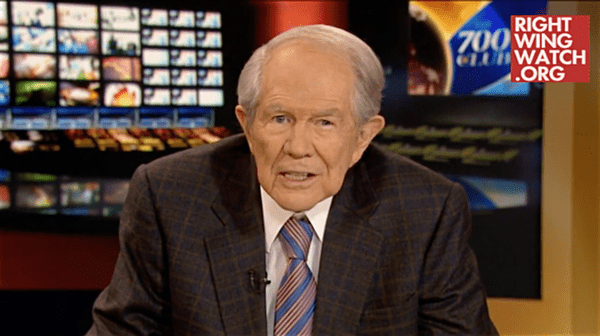 Pat Robertson is once again clueless.

Said Robertson on his show The 700 Club,

“These guys are supposed to be tough warriors in the NFL. Why are they suddenly going out to boycott a state because of some alleged offense against homosexual marriage? These NFL players are not going to get same-sex marriage, you wouldn’t think. What is going on with those people?”

“We are making a protected class of somebody that, you know, for centuries have been on the edges of society, and now suddenly it has become the big deal. And big companies boycotting a state because they have passed a law saying people should not be discriminated against because they believe in God? I mean, what kind of a boycott is that? It’s ridiculous.”

Yes, Pat. It’s opposition to a hateful bill that is ridiculous, not LGBT people being forced to exist on the ‘edges of society for centuries’ because of who they are and who they love.