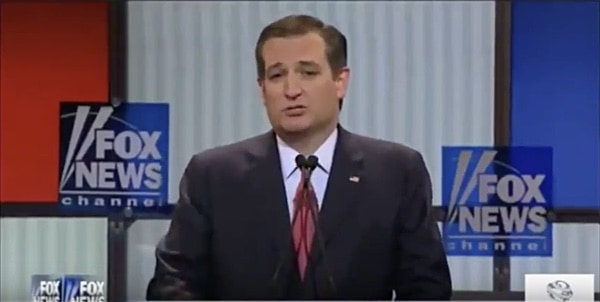 In last night’s GOP Debate, Ted Cruz was asked, “The US Supreme Court declared same-sex marriage legal in all 50 states, a decision you have criticized. Do you believe a gay couple should be able to adopt?”

Cruz offered a states’ rights answer and then blasted Trump for his position on the Supreme Court:

Well, listen, adoption is decided at the state level and I am a believer in the 10th Amendment in the Constitution, I would leave the question of marriage to the states, I would leave the question of adoption to the states.  That’s the way it has been for two centuries of our nation’s history until five unelected judges in an illegitimate and wrong decision decided to seize the authority over marriage and wrongfully tear down the marriage laws of all 50 states.

Bauer then turned to Trump:

“Senator Cruz definitely avoided saying your name, Mr. Trump, but I think he was referring to you and your religious liberty answer. Would you like to respond?”