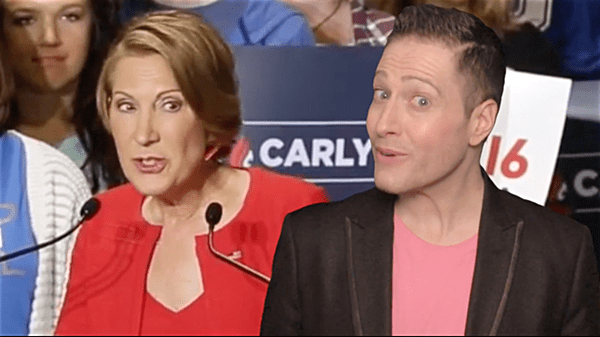 GOP dropout Carly Fiorina is back, and if you missed Ted Cruz’s bizarre announcement that he was choosing her as his running mate (before even getting within striking distance of clinching the Republican nomination), you also missed perhaps one of the most WTF moments of the 2016 cycle so far–and that’s saying something.

I’m talking about this.

Naturally, Randy Rainbow had something to say (or rather, sing) about it.

Watch as Randy performs a duet with Carly mashing up her nursery rhyme with his rendition of Irving Berlin’s “You’re Just In Love.”

Previous Post: « Calvin Harris and Rihanna Hope That ‘This is What You Came For’ Will Be the Song of the Summer: LISTEN
Next Post: HB 2 Repeal Legislation Sent to Committee Which Has Not Held a Meeting in Years »