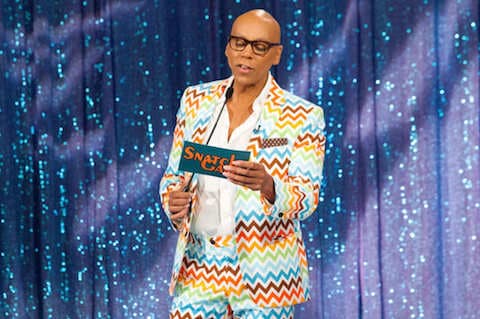 If season six gave us RuPaul’s Drag Race’s tightest Snatch Game ever, I guess that would make last night’s episode the series’ loosest?

Even though last season caught a lot of flack, the season seven Snatch Game was good enough to (rightly) warrant two winners. Expectations were high going into tonight’s Snatch, especially with such sharp queens among the remaining contestants. Sadly this season’s Snatch Game wasn’t quite a win.

Find out who snatched the victory and which Drag Race queen crossed a line in our rankings below.

1. Obviously Bob came in with a plan, and it paid off. Every moment we saw of Bob during Snatch Game was on point, and she went the extra mile by pulling off not just multiple costumes, but multiple characters during the game. That said, I still felt a little let down by her performance. She was the funniest (by far), but none of it was as laugh-out-loud funny as Snatch classics like Jinkx’s Little Edie, Ben’s Maggie Smith, Bianca’s Judy, Sharon’s Michelle Visage, hell, even Ginger’s Adele. Bob’s Snatch should have been legendary. But competent was enough to top this season’s Snatch, and, coupled with easily the best of tonight’s Madonna-themed runway looks, Bob deservedly was tonight’s winner.

2. Thorgy’s Michael Jackson was meticulously rehearsed, and her command over MJ’s tics and mannerisms was great. Unfortunately, it was missing, you know, jokes. As it was, it was just a very faithful impression of an inherently strange figure. The blanket/doll bit was clearly something she had up her sleeve, but she needed more moments where the character intersected with the game at hand.

3. Yes, I agree, Chi Chi’s Eartha Kitt performance was a bit one-note, but that’s still one more note than some of the other characterizations that lacked any sort of purpose, vision or point of view. Her makeup was great, the voice was right, the outfit made sense, and she wove her character choice (an overly simple cat joke) into her game responses. Again, not a Snatch for the Drag Race herstory books, but it at least showed that Chi Chi came prepared.

4. Neither Kim Chi’s first Snatch option, Pearl, nor her original(?) character Kimmy Jong Un felt like solid starting points on which to build a performance. (Actually, can we just set a new rule where you can’t do another Drag Race queen at Snatch anymore? It’s never as funny as you think it’s going to be. Show some savvy. Do some research. Read a book.) I still don’t fully understand what she was going for, but the fact she tried SOMETHING honestly put her ahead of many of the other queens.

5. I’ve been a big fan of Naomi Smalls the last few weeks, but man did she blow it this week. Her Miss Celie character showed promise, and it’s a shame she didn’t trust her gut there (especially since Bob opted to forgo her Whoopi). Naomi’s New York was a total flop. She showed more life than Betty in that lip sync (more on that in a bit), so her safety was earned, but I’m not sure she can come back from this.

6. If I called the shots, it all would have went down differently. As terrible as Betty’s Snatch was (again, more on that in a bit), Betty’s runway beat Robbie’s A League Of Their Own-inspired outfit. Robbie should have been in the bottom two with Naomi, and, having fallen short during another acting challenge (her speciality), it should’ve been Robbie heading home. Miss Turner lives to drag another day, but her time on Drag Race is definitely drawing to a close.

7. No one’s going to deny Betty’s ability to turn out some insane, gorgeous, other-worldly fashions, but I do feel a slight sense of validation for my assessment that she’s just not a good performer. The judges rightly read her Nancy Grace to filth for failing to approximate even the most basic elements of the oversized TV persona. The fact she didn’t know how to make Nancy Grace funny shows that she didn’t put the tiniest bit of thought into it. The lip sync was every bit as lazy and unsatisfying as I could have predicted, standing by my assessment that she may be Drag Race’s worst live performers.

N/A. You may have noticed one queen missing from the above rankings. I’ve got quite the bone to pick with Derrick Barry, and it’s making it hard to otherwise assess her performance.

If I were ranking the queens based solely on the performance in Snatch Game, Derrick would rank somewhere toward the middle. Her Britney obviously looked fantastic, and, honestly, she may have landed just as many jokes as Bob (at least according to what we were shown). The thing is, it’s not just about how they do in the challenges. It’s also about the individual queens’ personalities, and Derrick’s casual racism (and I’m being generous) is, in a word, gross. It doesn’t really matter that Michelle Visage first used the problematic phrase “ratchet drag” last week. Derrick was using it as an insult here, and Bob handled the situation with much more grace than Derrick deserved. Then, worse yet, Derrick’s first pick for Snatch Game — actress Laura Bell Bundy’s “Shocantelle Brown” — is essentially blackface without the makeup.

There’s a common refrain among artists (including RuPaul, Bianca Del Rio, even the late Joan Rivers) that their boundary-pushing (or, less generously, offensive) material is meant to be subversive, and that might be so. The problem with that is, even if the conversation sparked justifies the inflammatory means (and that’s a big if), it still empowers people who aren’t as intelligent, insightful or purposeful to use similarly insensitive language without any of the thought behind it. That’s the case with Barry (and Laura Bell Bundy). You can try to explain away how the “black woman trapped inside a white woman’s/gay man’s body” is not inherently racist (you’d be wrong), but there’s no denying it’s lazy, tired and not funny. It’s not that Derrick’s the first or only person on Drag Race to challenge political correctness, but this is becoming an unacceptable pattern that’s making her not only unlikable, but unwatchable.

Do you think Derrick has gone too far? How would you rank the Drag Race queens?