The federal government has finally recognized the April 1975 marriage of Richard Adams and Australian native Anthony Sullivan as valid.

The 2014 documentary Limited Partnership told the story of the couple’s relationship.

Following their headline-grabbing marriage, Adams petitioned for a green card for Sullivan. Immigration authorities refused the petition, saying the couple had “failed to establish that a bona fide marital relationship can exist between two faggots.” 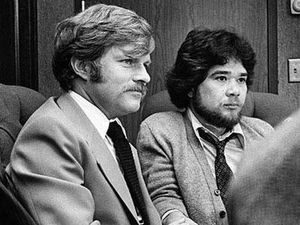 When the final ruling came from the Ninth Circuit Court of Appeals in 1985, Adams and Sullivan left the country. On return to the U.S. in 1986, they lived in fear that Sullivan would be deported until a 2012 Obama administration memo was issued to protect low-risk family members of U.S. citizens from deportation.

When Adams died in 2012, Sullivan requested that the Immigration Service recognize their marriage and grant him a green card as the widower of a U.S. citizen. As The Pride LA reports, the green card was issued on the 41st anniversary of the couple’s wedding in Boulder, Colorado. 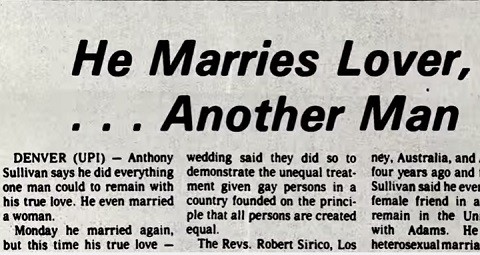 On the ruling, the couple’s attorney Lavi Soloway told The Pride:

“The unique and historic nature of this case cannot be understated. The U.S. government not only apologized directly to Anthony Sullivan, but, for the first time since the Supreme Court established the right of same-sex couples to marry as a protected, fundamental liberty – the Immigration Service has shown its willingness to correctly apply recent Court rulings and to recognize as valid this same-sex marriage that took place in 1975.  Undaunted by setbacks in the 1970s and 1980s Richard and Anthony never wavered in their belief that their marriage was valid and should be treated with dignity and respect. Eventually the Supreme Court and the Immigration Service caught up with them.

“This outcome is an example of the potentially far reaching ripple effects of the Court’s ruling in Obergefell.

“In 2014 we asked USCIS to take the steps necessary to reopen Adams’ 1975 petition in light of the Supreme Court ruling striking down the so-called ‘Defense of Marriage Act’ and subsequent victories by gay couples in marriage equality cases.

“After the Supreme Court ruling on Marriage Equality, USCIS acted on our request to apply, constitutionally valid principles to the 1975 green card petition. As a result, on December 1, 2015 the Board of Immigration Appeals ordered the petition be reopened and the original denial reconsidered.”

In January, Adams’ original petition was approved and was converted into a widower’s petition, allowing Anthony to move forward with his green card application.

This is incredible Congratulations to Richard Adams and Anthony Sullivan. https://t.co/gMzjfuIXbq

León Rodriguez, director of USCIS, has since written a letter of apology for the decision which referred to the couple as “faggots”:

“This agency should never treat any individual with the disrespect shown toward you and Mr. ­Adams. You have my sincerest apology for the years of hurt caused by the deeply offensive and hateful language used in the November 24, 1975, decision and my deepest condolences on your loss.”

Watch a trailer for Limited Partnership below.