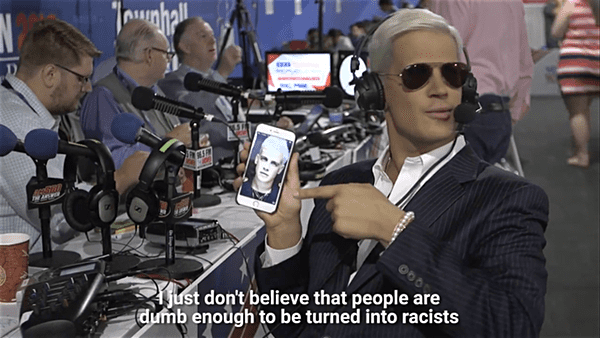 In a series of new interviews, Milo Yiannopoulos, the infamous homocon who was banned from Twitter and hosted the ‘Gays for Trump’ party at the 2016 Republican National Convention, made it clear that he’s nothing more than a delusional fame whore. And while he has ushered forth a new barrage of hateful, misguided remarks, he does’t deserve my outrage.

Let’s start with an interview he did recently with CNN. In it, Yiannopoulos twisted himself into a linguistic pretzel trying to defend his history of making disgusting remarks on Twitter. He called his attacks on Ghostbusters star Leslie Jones a mere ‘exchange of words’, adding that all he did was crack a few jokes at her expense. “I was mean and b*tchy, like I always am,” he said with a wry smile. Never-mind that he incited a racist onslaught against Jones.

Laying bare the absurd extent to which he has deluded himself, Yiannopoulos said that a tweet he sent calling the female stars of the Ghostbuster reboot “Fat and ugly, ugly, ugly, fat” was motivated by a concern for young girls. He explained,

“We’ve started to marginalize traditional beauty standards. Now what we’re expected to do is to celebrate body positivity. That it’s ok to abuse their bodies. To run the risk of horrible diseases and awful chronic conditions and to die sooner. That’s horrible. What I’m trying to do is to draw attention to a critique of what’s happening in mainstream beauty culture. And that comes from compassion about the messages we’re sending to young girls…The piece comes from compassion. I mean, this is just a little b*tchy tweet, who cares?”

Unsurprisingly, Yiannopoulos defended internet trolls, saying, “The trolls often aren’t the bad guys. Often the trolls are the only ones telling the truth.”

He also said that he plays a vital role in our culture: “My purpose is to be a fire-starter. In an outrage culture, I think the appropriate response is to be outrageous. I don’t want everyone to be like me, but I think it’s important there are some people like me.”

And he wants to offend you:

“[If] I offended you that’s me performing my function and you should grow a thicker skin and grow up. So long as there are people who think that offense taking and having grievances is equivalent to some genuine kind of injury, I’m still necessary.”

He added, “So long as there is a politics in this country, as there is, where people can turn victimhood and grievance into currency, I will continue to be as offensive as possible.”

In another interview with CNBC, Yiannopoulos said his banning from Twitter was proof that CEO Jack Dorsey is using Twitter as his own “private political fiefdom.”

He proudly compares himself to Azealia Banks and calls Donald Trump a “madman”–which in his mind is a compliment.

He also derided Twitter for trying to regulate a civil discourse, saying Twitter has no right to regulate what that even means.

PREVIOUSLY: There Was a ‘Gays for Trump’ Party at the RNC and It Was Absolutely Insane – VIDEOS, PHOTOS

Then in another interview from his stint at the RNC last week, Yiannopoulos said that Twitter has declared war on free speech, conservatives and libertarians by banning him. In his mind, “There’s no such thing as hate speech” and companies like Twitter shouldn’t ban people because “The companies that start censoring their users lose all of the most fun people.”

But towards the end of this video, Yiannopoulos gets to the real heart of what he’s after: fame.

“What [being banned from Twitter] might enable me to do is focus on things that matter, like my tour, getting books out, and doing big commercial projects that spread my message to as many people as possible. The ban’s the best thing that’s ever happened to me. Every time they come for me, I get more famous, more people listen to me, more people want to hear what I have to say. It was the best thing they could have ever done for me so thank you, Twitter.”

It all boils down to fame, doesn’t it, Milo?

Many readers may at this point may be wondering why I am reporting on this man when doing so only adds fuel to his fire.

Is writing about Yiannopoulos giving him what he wants? Yes.

But when a figure as caustic, hateful and in-denial as Yiannopoulos comes along, he warrants being exposed as what he truly is—not some defender of free speech, not a warrior against political correctness run amok, but a narcissistic fame whore, tantamount to a toddler having a tantrum, doing whatever he can to grab the spotlight. Come to think of it, no wonder he loves Trump so much.

While this is not the place to dissect our culture’s noxious obsession with fame, it is worth noting that Yiannopoulos’ brand of fame-seeking is the most cynical and destructive of all. It is the kind that justifies saying or doing anything in the name of attention.

There are fame whores among us. I write about some of them here on this site. And despite whatever you may think of those who seek fame, of me for writing about them and of yourself for being interested in them, there are those who seek the limelight without propagating a hateful, racist, and xenophobic agenda. In fact, many people who seek out attention turn their need for acclaim into an ability to do some modicum of good in this world. That doesn’t mean they aren’t thirsty for fame, it just means that maybe they realized there was a way to satisfy that thirst without making the human race even more disgusting than it already is.

So I refuse to be outraged by Milo whatever the f*ck his name is I can never remember how to spell it I copy and paste it every time because I refuse to learn the spelling. You have done me no injury, and despite what you may think, Milo, I’m not using outrage as currency. Because I’m not outraged. I’m disappointed that a person who clearly has your level of mental acuity has decided to put all his energy into such a negative and destructive way of living, and has deluded himself into thinking he’s actually benefitting the world in some way. Sweetie, you’re not.