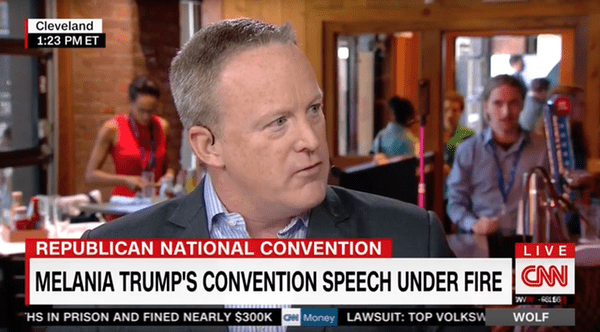 The RNC’s chief strategist and communications director Sean Spicer quoted My Little Pony in attempting to prove that Melania Trump did not plagiarize her speech from one given my Michelle Obama at the 2008 Democratic National Convention.

Spicer quoted My Little Pony twice on Tuesday, appearing on both MSNBC and CNN.

On CNN, Spicer said that the controversy stems from “70 words” and “3 passages”, implying that plagiarism isn’t plagiarism unless there’s a minimum number of words plagiarized that presumably exceeds 70.

RELATED: It Was Melania’s to Lose: GOP Convention Morning After, Day 1

Spicer went on to argue that phrases similar to those in both Melania Trump’s speech and Michelle Obama’s 2008 speech have been used by John Legend, Kid Rock, and, of course, Twilight Sparkle from My Little Pony.

“Twilight Sparkle from My Little Pony said ‘This is your dream, anything you can do in your dreams you can do now.’ I mean, if we want to take a bunch of phrases and run ’em through Google and say, hey, who else has said them, I could come up with a list in five minutes. And that’s what this is.”

“I just quoted Twilight Sparkle from My Little Pony. She said something similar too, so did Mrs. Obama plagiarize her too?”

Here’s Spicer making the same assertion on MSNBC before an incredulous Craig Melvin.

The moment quickly caught the attention of the Twitter-verse, and “My Little Pony” began to trend.

And it’s been delicious.

You keep Twilight Sparkle's name out of your mouth, you monsters. https://t.co/hWnP8ImWBa

You guys. I KNOW Twilight Sparkle and I can tell you RIGHT NOW, she wants NO part of this mess. #KeepEquestriaGreat https://t.co/Bf3vv0kpgz

"Sean Spicer." ironically, is the perfect name for a My Little Pony character who was cool with plagiarism. https://t.co/J0arrFWf5V

Based on this reaction alone, the GOP is losing their base voters by citing My Little Pony. https://t.co/HiQT1A5BAa

I would very much like to be excluded from this narrative https://t.co/I46VtY2CXI