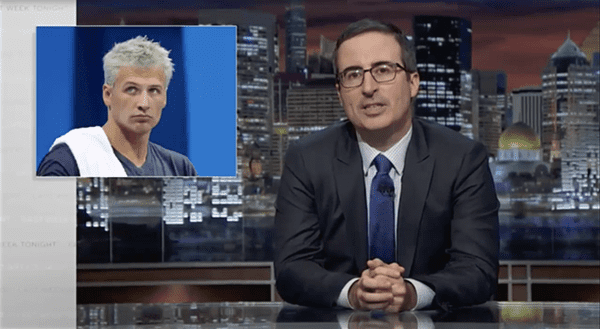 On Last Week Tonight on Sunday, John Oliver tore into American swimmer Ryan Lochte for having fabricated claims he made that he and his teammates were robbed at gunpoint while in Rio de Janeiro for the 2016 Olympics.

As we’ve reported, what apparently happened is that Lochte and 3 other Team USA swimmers vandalized a gas station and were made to pay for the damage they did by an armed security guard.

Oliver described Lochte alternately as “the purest form of the chemical element Bro” and “If Sting was a jock.”

Reading Lochte’s apology which he shared on Instagram, Oliver called it “a bullish*t apology” and added, “There is no way he wrote that.”

Said Oliver, “The fact that Lochte is a total a**hole is not remotely surprising. It’s just that it makes him a lot less fun now. So as we say goodbye to the Rio Olympics we must also say farewell to one of America’s favorite idiots.”

On Monday, Speedo announced it would drop its sponsorship of Lochte over his behavior in Rio.

Previous Post: « Rio 2016, Last Day Report: Basketball, Pouring Rain and Carnaval
Next Post: Jaden Smith Prepares to Land a Hot Kiss on a Guy in ‘The Get Down’ – WATCH »