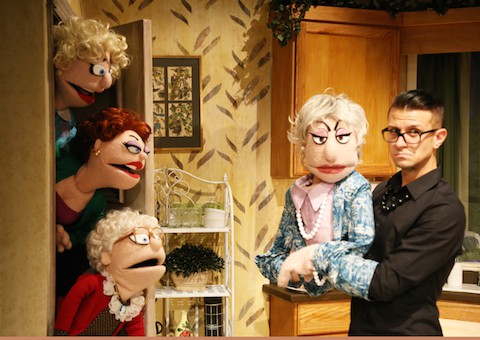 Picture it…wicker furniture with floral cushions in soft, pastel hues, the sound of canned violins, and the shenanigans of four women you’d swear were your best friends despite whatever age difference may exist between you.

Now imagine a hand reaching up their skirts. America’s favorite ‘80s ladies have been reunited off-Broadway — in puppet form, courtesy of That Golden Girls Show!, which opened October 3 at the DR2 theatre.

You may assume any number of things to be true of creator and director Jonathan Rockefeller’s campy homage to the cult-favorite sitcom, which has been in ceaseless syndication since its original run from 1985-1992. 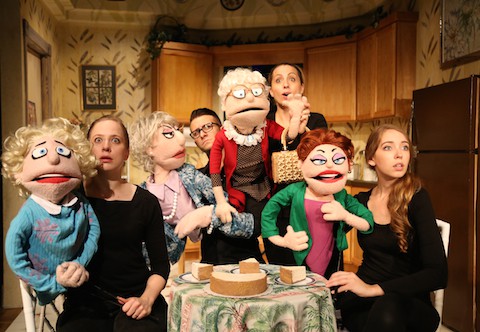 Yes, the production packs in some of the show’s great punch lines and draws on various plotlines fans will find familiar (Rose’s pet fish, Blanche’s botched cosmetic surgery, Dorothy’s louse of an ex Stan). The intermissionless show consists of what seems like three half-hour episodes, stitched together with blackouts that might as well read, “To be continued…” Diehards will recognize that the story arcs here form a kind of collage rather than replicas of specific episodes, which is for the best.

No, the laughs don’t always land as they do on the series, but that’s to be expected. (How could anyone live up to the comic genius of Bea, Estelle, Betty, and Rue?) It would be impossible to reach every high bar set by the original, so a puppet parody feels like the right medium to revisit the iconic characters. 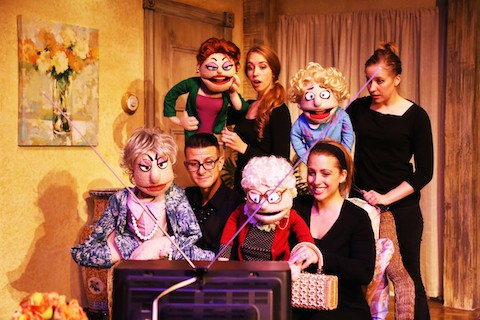 The performers are all to be applauded for tackling such well-known personalities; each of them voices their character and supplements their puppet’s performance with their own expressions and body language, while careful not to pull too much focus. As the sardonic, barrel-voiced Dorothy, Michael LaMasa is the standout of the bunch, nailing Ms. Zbornak’s razor-sharp tongue.

The puppets themselves are a treat, too, their faces subtly fixed into the characters’ most dominant state of mind. (Rose’s eyebrows are perpetually raised, while Blanche’s eyes always seem to be making whoopee.)

For all its laughs, like the series itself Rockefeller’s parody traverses such territory as the nature of life and death, and what it means to grow older, form attachments, lose your way, and find what you’ve been looking for right under your nose. The Golden Girls appealed to millions because the ladies know things about life it can take years to learn. And even their hardest-won wisdom comes with a laugh — and in this case, a whole lot of felt.