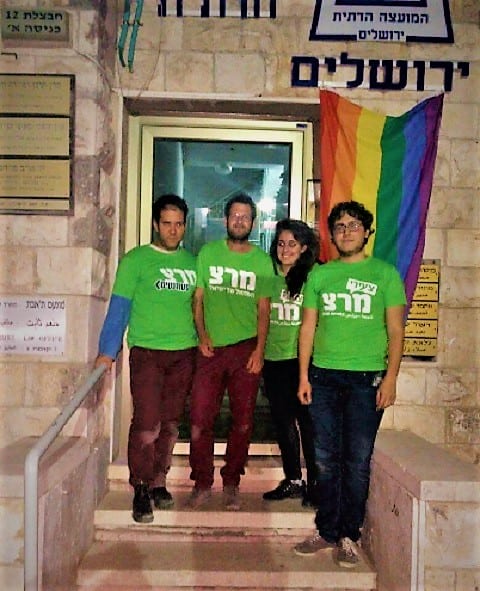 Activists in Jerusalem hung a rainbow flag outside the offices of a chief Rabbi last weekend after he called the LGBT community “a cult of abomination.”

In an interview published last Friday, Rabbi Shlomo Amar said that the bible calls for the death penalty for all gay people.

“This is a cult of abomination, this is clear,” said Amar. “This is an abomination. The Torah requires a death sentence for this. This is in the first row of the most severe transgressions.”

According to the Jerusalem Post, Amar also said that homosexuality is a choice and “a person can overcome it if he wants, like all other desires.”

On Sunday morning, a group of Meretz activists from the Hebrew University raised the rainbow flag. In an accompanying post on Twitter, the group added the message:

“A group of Meretz activists from the Hebrew University have adorned Rabbi Amar’s bureau in Jerusalem tonight with the pride flag. May you have a week of love, pride and full of acceptance of the other.”

Several lawmakers have also spoken out against Amar’s comments, while representatives of the Yerushalmim movement demonstrated outside the offices of the Jerusalem Rabbinate, together with other activists from the city.

Also coming out in support of Amar was Israel’s largest-selling ultra-Orthodox daily Hebrew-language newspaper Yated Ne’eman, whose editorial board declared that the rabbi was merely quoting the Torah.

“A group of ignoramuses who have never read or studied [Torah], lacking any basic understanding of the eternal Jewish Torah, hear some comment of a haredi speaker, whether an honorable rabbi or public figure, when he attacks one or another of the secular subcultures and presents the Torah perspective on it, and then at a time when there are no more engaging headlines, this comment is turned into a ‘storm’ or ‘outrage,’” read the Sunday editorial.