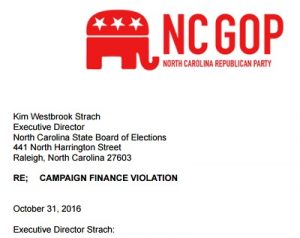 A campaign violation complaint issued by the state GOP on October 31 charges that “While this event is being advertised as nothing more than a forum, its proximity in time to the general election and its focus on an issue repeatedly raised by the democrat party and Roy Cooper belies the true purpose and motivation behind the event.”

According to Slate, the complaint was motivated by the fact that the forum “is sponsored in part by Red Ventures, LLC, a marketing company whose CEO supports Republican Gov. Pat McCrory’s [above] Democratic opponent, Roy Cooper.”

It also charges the company with supporting Cooper by providing employees time off on Election Day—probably so they can “vote for Roy Cooper and other democrat candidates,” the letter sneers. Moreover, the complaint points out that the forum would discuss polling data compiled by Public Policy Polling. PPP “conducts opinion polling that has an [sic] bias in favor of the Democrat Party,” the complaint declares, pointing out that its CEO supports Cooper. Taken together, these facts can only lead to one conclusion: The forum is actually a corporate contribution to Cooper’s campaign, in violation of state election law:

The complaint continues that if the forum is not a “contribution,” it must at the least be considered an illegal “independent expenditure” on Cooper’s behalf. This forms the grounds for the GOP to demand that the forum be “immediately canceled, and the entities be appropriately sanctioned.”

Examining the hypocrisy behind the complaint, Slate notes two areas of concern:

The second thread here is even more interesting: Apparently, the North Carolina GOP is terrified of open and honest discussion about the bill it insists is being misrepresented and unfairly attacked. The forum included both proponents and opponents of HB2, and allowed the bill’s supporters to speak extensively about why they believed transgender people should be excluded from public bathrooms. To balance out these claims, of course, the forum also included HB2 detractors—but the conversation was civil and balanced, devoid of propaganda, heavy on candor. It was, in short, a frank discussion of a hot-button political issue, exactly the type of speech and association the First Amendment was designed to protect.

The State Board of Elections declined to shut the event down perhaps according to Slate because “it understood that any intervention would undoubtedly qualify as unconstitutional censorship, opening up the board to civil liability.”

Either way, the entire episode ultimately provided a great deal of welcome clarity: It seems the North Carolina Republican Party is not so much eager to defend HB2 as it is anxious to stifle any potential criticism of the bill. That might be a rational reaction to a law that is sinking Republicans in the polls. But it is also a stark betrayal of the First Amendment values that Republicans today allege to hold so dear.