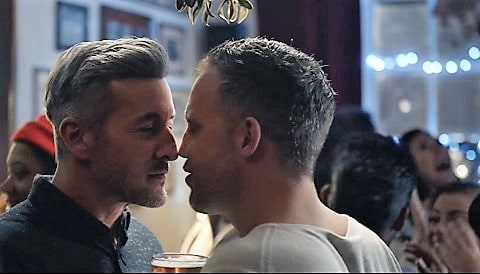 The holiday ad celebrating Britain’s diversity – soundtracked by a Lucy Rose cover of “Merry Christmas Everyone” – shows two men kissing under the mistletoe.

It appears that not one person has complained to the broadcaster and not even scurrilous rag The Daily Mail has had anything to say on the burning issue. Now that’s progress.

OMG a BBC Christmas trailer featuring a gay kiss, the Daily Mail is going to shit itself!!!

Awesome that the @bbc have a same-sex kiss in their new Christmas ad. It shouldn't be a big deal in 2016, but it is. https://t.co/Cg4l8Twd6W

The @BBCOne Christmas ad is so lovely. It'll brighten up your Monday for sure. (Contains a very cute gay kiss too). https://t.co/HSsO8NpwEm

Oh God, the BBC has a gay kiss in their Christmas ad. We should all phone every UKIP supporter immediately to make sure they're ok.